Browse the article How the Tornado Intercept Vehicle Works 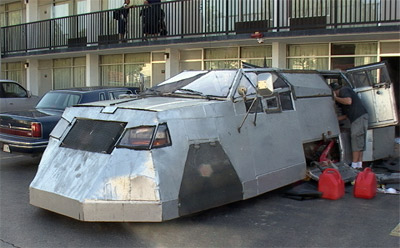 Most people -- especially those living in the American Midwest -- know how to boost their chances of surviving a tornado. First, get into a basement or a storm cellar. If that's not possible, hide in an interior, windowless room, preferably under a mattress or blankets. Never stay in a car or a mobile home -- lying a ditch, while definitely uncomfortable in the middle of a severe storm, is a lot safer.

Some people ignore this advice and become tornado chasers, but even chasers generally stay about a mile away from a tornado -- close enough to see, but relatively out of danger. Anyone wanting a closer look, or to actually get a glimpse of the interior of a tornado, would need a heavy, armored vehicle that could withstand intense winds, debris and hail.

That's exactly what IMAX cinematographer Sean Casey has built with his Tornado Intercept Vehicle (TIV). The TIV is big, heavy and armor plated. With it, Casey hopes to record a direct hit with a tornado and survive.

Read on to learn more about the TIV's armor and instruments, as well as what happens when it encounters a tornado.

Thank you to Willy Cheng for his assistance with this article. 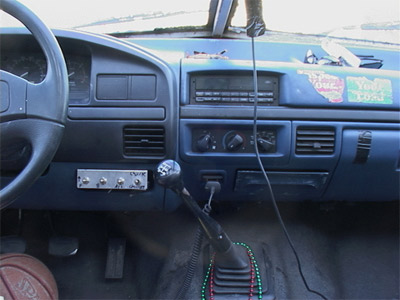 The TIV is essentially a large, mobile, armored tripod for an IMAX camera. Its purpose is to allow filmmakers to record footage from very close to -- or even inside of -- a tornado.

The TIV was originally a Ford F450 pickup truck. Its transformation into the TIV took three months of 7-day-a-week work. After stripping it down to its engine and chassis, Casey created a new frame and body out of steel, which uses:

Tires need to be accessible, yet protected from debris, so a hinged 1/8" steel flap covers each wheel well. Each of the four doors features a double layer of 1/8" steel plate. When closed, the doors lock into place with heavy steel bolts.

The TIV's side windows are 1/2" Lexan resin, a very strong plastic. For better visibility, its windshield is a scratch-resistant tempered glass and Lexan laminate.

Since the TIV's purpose is to provide a safe spot for filming, it has a special military-style turret to house the IMAX camera. The turret spins 360° on 3" steel bearings, allowing the crew to shoot footage in any direction. The TIV also has two hatches for smaller format cameras.

Including its skeleton and frame, the TIV weighs almost 14,000 pounds. In spite of all this weight, it can reach up to 90 mph.

In the next section, we will look at the equipment inside the TIV.

The Future of the TIV and Why Not Just Use a Tank?

The current Tornado Intercept Vehicle is really a prototype, and it has undergone a number of modifications since its first season in the field. A second vehicle, the TIV-2, will include additional features like steel panels that drop down when the vehicle is in the path of a tornado. These panels will keep air from getting under the vehicle and reduce the likelihood of becoming airborne.

A lot of work went into building the TIV, and a significant number of repairs have gone into keeping it running. So why not just use a tank?

A primary reason is that tanks generally travel at much slower speeds than the TIV. Tornadoes can develop and dissipate within a few minutes, so speed is important to tornado chasers. Since the TIV is built around a pickup truck's engine and steering, no special training is required to drive it. 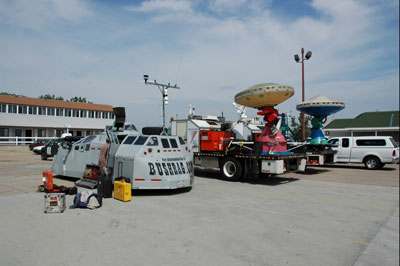 The TIV, after the addition of the IMAX camera turret, parked beside two Doppler on Wheels units.
Photo courtesy George Kourounis

Since it can survive very high winds and hail, the TIV provides a good opportunity to collect tornado data. Inside the TIV are a variety of meteorological instruments, including:

Now, let's look at what happens when the TIV finds a tornado.

Scientists are eager to know more about tornados. What exactly causes them? What factors determine their strength? Why do they behave the way they do?

Two of the major projects underway to gather and analyze more data about tornadoes are: 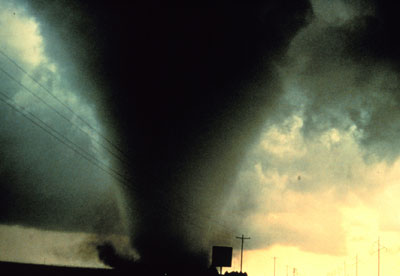 What happens when the TIV chases a tornado? That depends on whether Casey and his team are working with other chasers or independently. The first step is always research. All storm chasers must determine where tornadoes are likely to form and which approach to the storm will give them the best view while keeping them out of the most dangerous parts of the storm.

Recently, Casey has worked with Dr. Joshua Werman of the Center for Severe Weather Research (CSWR). The CSWR uses the DOWs and other equipment to study tornadoes. Members of the CSWR team analyze data about the storm and help decide where to deploy the TIV [ref]. When working with the CSWR, the TIV collects data up to the edge of the debris cloud, not into the tornado itself.

However, Casey designed and built the TIV with the goal of getting footage of a tornado approaching and then hitting the IMAX camera. In order to do this, he positions the TIV in the path of a tornado in a low-lying area. Then, the team films the tornado from within the TIV turret. Casey designed the TIV to withstand 200 mph winds, which accounts for about 75 percent of the tornadoes that form in the United States. This, and careful attention to the progression of the storm, reduces the likelihood of damage or destruction.

Eventually, footage from the TIV's expeditions will appear in an IMAX film about tornadoes called "Tornado Alley."

For more information about the TIV, tornadoes and tornado chasing, check out the links on the next page.

The TIV crew takes precautions to help ensure their safety. In addition to using data from their instruments and those of other chasers to gauge the strength of the storm, they wear helmets and goggles during their intercept attempts. A worst case scenario for the chase crew would include:

With these factors present, a tornado could theoretically lift or move the TIV, or pull it apart.

The TIV isn't the only vehicle made specifically to approach and film a tornado. Another is Steve Green's Tornado Attack Vehicle (TAV). You can learn about other chase vehicles at Tornadochaser.com.