by Ed Grabianowski
Prev NEXT
9

The Storm of the Century, 1993 -- Eastern United States 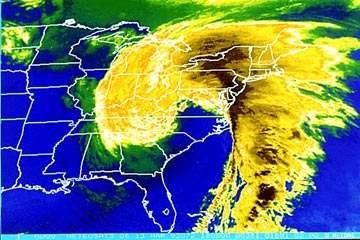 The "Storm of the Century" certainly lived up to its name, affecting about half of the population of the U.S. in 1993.
National Oceanic and Atmospheric Administration (NOAA)

In 1993, an early March storm surged up the east coast of the United States, unleashing snow and wind on a wider area than any other storm in recorded history. Massive snowfalls were recorded from eastern Canada to Alabama. Parts of 26 states were hit; roughly half of the entire U.S. population was affected, including many large cities [source: NOAA]. Two hundred and seventy Americans were killed. This storm is often compared to the Blizzard of 1888 -- in many areas, it wasn't as severe and didn't drop as much snow, but it covered a much larger area.

This storm broke numerous weather records. A low temperature of minus 12 degrees Fahrenheit (minus 24.4 degrees Celsius) was recorded at Burlington, Vt., while even Daytona Beach, Fla., felt the effects, with a low of 31 degrees Fahrenheit (minus 0.56 degrees Celsius). Birmingham, Ala., received more than a foot of snow (30.5 cm), with four inches (10.2 cm) falling as far south as Atlanta, Ga. Snowfall totals were amplified farther north -- Syracuse, N.Y. got more than 40 inches (1.02 m), for example. Mountainous areas in the Appalachians and Catskills got the most snow, with recorded totals of 50 inches (1.27 m) or more. Wind speeds topped 70 mph (112.7 kph) in many places, and topped 100 mph (161 kph) in a few locations. Using storm surge and barometric pressure data, meteorologists say the Storm of the Century was the equivalent of a category three hurricane; it ranked a 13.2 on the NESIS scale.