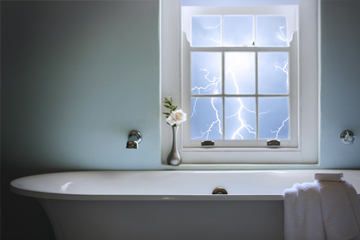 It's a good idea to avoid bathtubs during a thunderstorm; you also should avoid faucets and other plumbing.
Martin Barraud/Getty Images/sytilin/ThinkStock

Is it dangerous to bathe in a thunderstorm? A bathtub would be a lot easier. (Ba-dum-dum.) Seriously though, it's long been rumored that taking a nice, hot soak in the tub or enjoying a warm shower is a dangerous proposition when electricity is coursing through the sky. And before we get into the truth about bathing during a lightning storm, let's first discuss why it's even a question.

For one, there are a lot of silly myths about lightning. For instance, a plane getting hit by lightning generally isn't really that big of a deal — although pilots aren't crazy and do try to avoid thunderstorms, planes are built to safely conduct currents [source: NOAA]. And yes, lighting will strike the same place twice, and many tall structures are hit often. Even the old "rubber tires on a car protect you from lightning strikes" adage is totally false; a car is safe because it has a metal roof and sides to conduct the current to the ground [source: NOAA].

Get the point? There are a lot of common misconceptions about how lightning works (and what it can affect), so it's not altogether crazy to think that the old "don't shower during a storm" line is another old wives' tale. But don't be mistaken about this one.

It really is dangerous to bathe during a thunderstorm. And not just theoretically dangerous; we're talking 10 to 20 people in the U.S. a year suffer injuries while messing around with household water during a storm [source: O'Connor]. And that doesn't just mean sitting in the tub, waiting for (literal) lightning to strike. Doing the dishes or even using faucets proves dangerous, too.

The reasons are grounded in the pipes. A lot of pipes used in household plumbing are metal, and that metal is irresistible to a bolt of electricity. What's more shocking (excuse the pun) is that the water — often loaded with impurities — helps conduct the electricity. Cover yourself in the wet stuff — either in a shower, bath or just using the faucet in general — and you help that electric current jump right to you. But, as we said earlier, with more than a dozen people getting hurt each year, it's not the biggest threat. As of Aug. 1, 2018, 15 people had been killed and 58 people had been injured by lightning according to The National Weather Service and StruckbyLightning.org.

The National Weather Service doesn't take the risk lightly. The agency advises that during a thunderstorm, it's best to stay away from plumbing and faucets. An excellent excuse to skip doing the dishes during a dark and stormy night!

Why are there more thunderstorms during the summer?
How (and Why) Hurricanes Get Their Names
Inside the Weird Little World of Microclimates