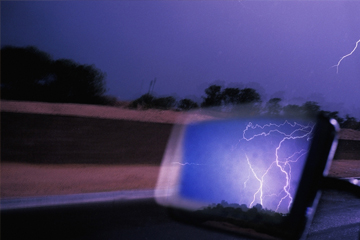 Your car is a fairly safe place to be in a thunderstorm, but not because of your tires.
Lyle Leduc/Getty Images

There are some weather incidents where you don't want to find yourself sitting in traffic. Hurricanes and tornadoes come to mind, of course – any storm that can to blow your car away is going to result in a scary, unsafe situation for a commuter. But for years, we've heard that as a thunderstorm approaches, there's no place more secure than your car.

The theory goes like this – being in a car is your best bet to protect you from lightning, because rubber is an insulator, not a conductor, of electricity. Therefore, the rubber tires of a car will ensure you're safe and sound in your well-insulated vehicle. Incidentally, that's why you also should wear rubber-soled shoes in thunderstorms. No harm happens to a person wearing rubber shoes. That's what Grandma always said, anyway.

Grandma needs to get her facts straight. Rubber does not protect you from lightning. Rubber is indeed an electrical insulator, but your shoes or bike tires, for instance, are way too thin to protect you from a lightning strike. Here's where your grandmother is right, though – your car is a fairly safe place to be in a thunderstorm, but for a different reason entirely.

While the rubber from the tires won't protect you from lightning, the metal frame of the car certainly could. Electricity takes the path of least resistance, which is down the metal framework of your car. Think lightning rod. A metal enclosure conducts an electric charge to the ground, leaving the inside shock-free. (That's referred to as a Faraday cage, for those seeking extra credit) [source: Skeldon]. By remaining in your car, you're absolutely safe from any lightning that might strike. Right?

Not so fast. First, you need to have an enclosed, metal-framed car for this to work. That means convertible or fiberglass-framed cars are zero help in a storm [source: NLSI]. Further, even if you do have a metal-framed car, you're not guaranteed to escape injury. There are a whole host of metal things to cling to or brush against in a car (door handles, radio dials – even the steering wheel) that will happily conduct that lightning your way.

Your best bet if you're in a car during a storm? Pull over, turn off your engine, turn on your emergency lights, and sit quietly with your hands to yourself [source: NLSI]. Grandma would approve. 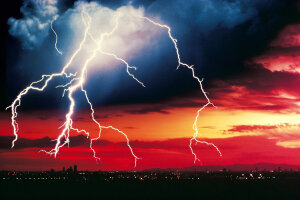 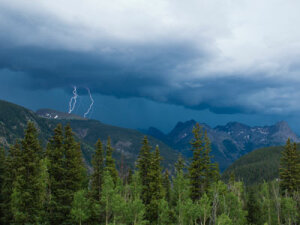 How to Survive a Storm in the Middle of the Woods 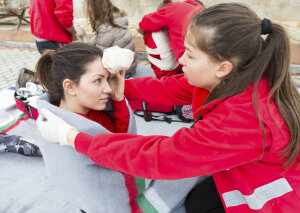