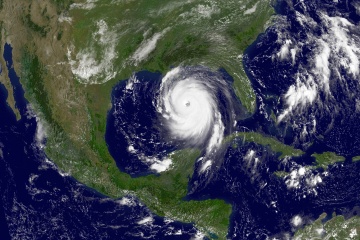 Hurricane Katrina thunders through the Gulf of Mexico on Aug. 28, 2005. A day later, it made landfall. According to the Federal Emergency Management Agency, 1,833 people ultimately died as a result of the storm.
Stocktrek Images/Thinkstock

When Hurricane Floyd hit the coasts of first North Carolina and then Virginia in September 1999, it sent winds whipping up to 130 mph (209 kph) across the storm's 580-mile (988-kilometer) path. Over the course of 12 hours, Hurricane Floyd hammered the area with up to 20 inches (51 centimeters) of rain. Rivers escaped their banks to wash away roads, flood homes and drown millions of livestock.

In what was later labeled a "500-year flood," the storm claimed more than 50 lives, caused thousands to become homeless and racked up $6 billion in damage. Worse yet? There have been dozens of other hurricanes, most of them deadlier and more damaging. And, aside from Hurricane Floyd, not one of them carries a male moniker [source: NASA].

Why are hurricanes with female names deadlier? It all has to do with public perception. Researchers analyzed hurricanes that have made landfall on the U.S. from 1950 to 2012. As they studied the deaths that occurred as a result of more than 90 hurricanes, a pattern fell into place: Female-named hurricanes killed more people than hurricanes with a male name.

The findings, published in the journal Proceedings of the National Academy of Sciences in June 2014, noted that on average, a hurricane with a masculine name resulted in 15 deaths, while a comparable hurricane with a female name would result in 42 deaths. The researchers suggested that one possible reason for the discrepancy could be the name of the storm. Female names, especially friendly sounding names like Belle, may have made the hurricanes seem less intense. This could have caused people to underestimate the storms and take fewer measures to protect themselves before the storms' arrival.

Despite this study, other researchers claim it's impossible to tell whether gender bias actually plays a role in hurricane survival. Other factors, such as sociodemographics, culture and ability to respond heavily influence survival odds. In addition, not all hurricanes make landfall at the same time of day or night, and this can affect death tolls, too.

It's also important to note that from the 1950s to 1970s, the World Meteorological Organization used only female names for hurricanes. It wasn't until the late 1970s that the Switzerland-based organization began alternating male and female names. It's a system the WMO continues to use as it selects hurricane names years in advance [source: Rice].

HowStuffWorks Illustrated: Hurricane Categories
Earth's Early Atmosphere Was Briefly a Methane Haze
Could there be a triple rainbow?