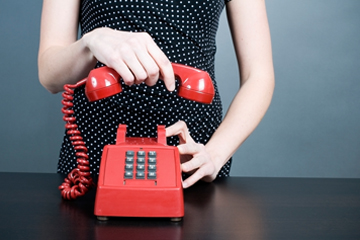 Assuming you even have a landline phone, yes, you should give it a rest during a thunderstorm.
Stacey Newman/ThinkStock

Here is a list of things you probably know you shouldn't do in a thunderstorm: (1) fly a kite, (2) stand under a tree, (3) wrap yourself in metal armor and play touch football, (4) put an antenna on your head, (5) stand on top of the Empire State Building and taunt Mother Nature or (6) call someone and make her sing "My Favorite Things" to calm you. Some of these, of course, result in more damage than others. After all, annoying a friend with your best rendition of Julie Andrews isn't going to result in the same traumatic neurological damage that, say, a wannabe Ben Franklin would suffer during an electrical experiment in a howling storm.

Or will it? Because many of us have long been told that talking on a landline telephone during an electrical storm could cause an electric bolt to shoot straight to our ears. And while it sounds a little bit too neurotic and alarmist to be legit, there certainly is truth in the rumor. If you're safe at home during a storm, it's probably best not to call anyone for a long-winded chat.

To understand why the landline is going to send fatal shivers up your spine during a storm, you have to respect how fast electricity likes to travel. It doesn't mosey along: It runs as fast as it can to the ground. So if your house is hit by a lightning bolt, the electricity will immediately find a perfect path in the metal wiring on your home [source: MythBusters]. And if you're speaking on the phone, the end of the wiring just happens to be your ear.

That means exactly the grim outcome you're expecting: a dose of electricity that can burst eardrums and even lead to cardiac arrest. In fact, one or two people die from lightning-through-phone strikes every year [source: MythBusters]. But don't think it's just the telephone that leaves you vulnerable; handling any electrical equipment (like your television or blender) during a storm also puts you at risk for a traveling current [source: Donahue].

Even more disconcerting is that the New England Medical Journal has documented that iPods (or other personal electronic devices) present their own small hazard in thunderstorms. Basically, a bolt of lightning often doesn't hit a person directly. Instead, it jumps from the target to the human. That often results in a more superficial electrical jolt. However, if you have metal earbuds plugged straight into your ears, you're at risk for a more damaging internal shock -- and one that goes straight to your head [source: Heffernan]. The big lesson? Give your workout a break during thunderstorms. It won't kill you to sit on the couch one afternoon. A run in the storm, however, might.

What causes the smell after rain?
'Rainbow Lightning': One of Mother Nature's Rare Shows
How (and Why) Hurricanes Get Their Names