Can we harvest the energy of lightning? 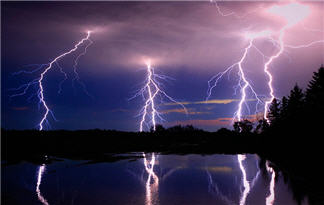 Lightning packs a huge amount of power - 5 billion joules of energy in a single bolt to be exact. Check out these amazing lightning pictures!
iStockphoto/Thinkstock

A single bolt of lightning contains 5 billion joules of energy, enough to power a household for a month. The energy of a thunderstorm equals that of an atom bomb. If we're already generating power from unexpected sources like ocean currents in our quest to wean ourselves of polluting- and limited- fossil fuels, why not pull electricity from the air, especially when everyone can see it lighting up the night sky?

If you've pondered that question, you're not the first. In 2007, a company called Alternative Energy Holdings tried to make it happen, with a design that involved a tower, grounding wires and a capacitor. But, CEO Donald Gillispie told the New York Times:

Quite frankly, we just couldn't make it work...Given enough time and money, you could probably scale this thing up. It's not black magic; it's truly math and science, and it could happen.

The logistical problems involved in making it work are significant. First of all, there's the basic fact that thunder storms are sporadic and lighting strikes random; considering that energy demands are steady, dependable energy sources are preferable.

Second, it's not so easy to capture energy delivered in one enormous blast in a split second. It has to be stored and converted to an alternating current, without blowing out the collection system in a single large strike.

Third, the energy contained in a lightning bolt disperses as it travels down to Earth, so a tower would only capture a small fraction of the bolt's potential. In the end, barring the development of a technology that could capture the energy from lightning before it strikes, it's probably best to focus on other, more earthly sources of energy.