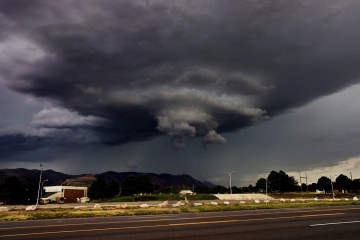 There have been several reports of higher-elevation tornadoes, such as this one in Colorado Springs, Colorado.
Zachary Roberts/Getty Images

We often think of tornadoes as whirling dervishes, happily plowing swaths of destruction but also somehow avoiding certain things like big cities, bodies of water or mountains – as if tornadoes are a force of nature with a deep sensitivity to outside stimuli. Is this portrait accurate?

For a more accurate picture of tornadoes, we need to acknowledge that they don't have any pet peeves. Things tornadoes love: destroying stuff. Things they're afraid of: nothing. Not cities, not the Mississippi River, not the Rocky Mountains. Give a tornado a cookie, and it will take that cookie, crumble it, throw it back in your face at 200 mph (322 kph) and then rip out your oven for good measure.

Our point is, there is a whole load of myths about tornadoes promising to unlock a secret "strategy" for thwarting them. However, you'd be hard-pressed to find one with any real merit. Add to the pile the subject of this article – tornadoes avoiding mountains.

Now that we've made it clear that tornadoes can absolutely hit anything, including a mountain, let's back up and point out some reasons why we actually don't hear much about tornadoes in the mountains.

Tornadoes occur most often in the Midwest plains, which have the best conditions for twisters. Namely, humid and unstable air that often leads to thunderstorms, setting the stage for tornadoes [source: Prociv]. Mountains, however, have much colder air, which is more stable and rarely creates conditions for storms. Add in that it's much harder to spot a tornado in a mountainous area and that fewer people live in these higher elevations, and you've got yourself a recipe for less noticeable tornado activity [source: Swanson].

But don't be fooled. Tornadoes can and do hit mountains, and there have been several reports of higher-elevation tornadoes. A biggie was the Teton-Yellowstone tornado that touched down in July 1987. It traveled more than 10,000 feet (3,048 meters) above sea level up the Grand Teton mountain range and even crossed the Continental Divide.

The higher it climbed, however, the weaker it became [source: Potter]. Maybe tornadoes have a weak spot after all – a fear of heights.

10 Times Humanity Fought Against Nature (and Won)
How a Sharknado Would Work
Swamps and Wildfires: A Dangerous Combination