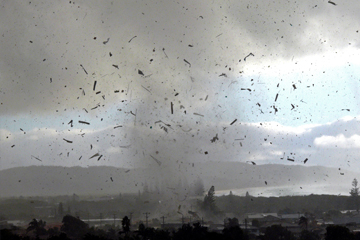 Debris flies through the air as a freak tornado tears through the coastal town of Lennox Head, Australia, on June 3, 2010.
Ross Tuckerman/AFP/Getty Images)

The United States has its fair share of unique, utterly American features. Yellowstone's billowing geysers are a pretty standard image of the U.S. The geologic majesty of the Grand Canyon also comes to mind. Really big pancakes? Yeah, Americans love those. But there are also more disconcerting North American traditions -- the systematic racism of slavery, for instance. And don't forget about the natural disasters that seem to camp out on this little corner of the globe. Tornadoes are one native feature that occurs with disturbing regularity in certain parts of the United States.

But that doesn't mean that North America has a trademark on the twister. In fact, tornadoes have occurred on every continent except Antarctica [source: Williams]. The United States definitely gets the most: At about 1,400 reported tornadoes a year, the U.S. gets slammed far more than other areas do. The United Kingdom has the most of any European county, with about 33 reported tornadoes a year. Overall, Europe sees about 300 twisters a year [source: Jensen].

South America appears to breed weather conditions that are also favorable to tornadoes; the area between Brazil and Argentina gets a decent amount of "tornadic storms," or storms that produce the kind of hail and high winds that could lead to a tornado [source: Abate]. Areas in India and Bangladesh are also quite susceptible to tornadoes and extreme weather, but with one big difference.

While there's a wide window for the right conditions to cause tornadoes in North America -- humid air coming up from the south to displace colder systems -- areas near the Bay of Bengal that experience tornadoes have a much more limited season. The winters are so dry that there's not a huge threat of moist air, apart from a few weeks of the year [source: Abate]. But make no mistake: That short window still allows for extremely dangerous tornado conditions. A 1989 Bangladeshi twister left 1,300 people dead and displaced 80,000 [source: Khazan].

It is important to keep in mind that many places with tornadoes or tornado-like activities simply aren't seeing the same severity. Even in the United States, we generally see that about 75 percent of our twisters are weak, and 22 percent are strong -- only the remaining 3 percent are judged violent [source: Jensen]. Europe might see the same thing, but because they're getting fewer tornadoes, the big ones are rare. North America, unfortunately, just gets so many more tornadoes that -- as luck of the draw has it -- we're simply bound to get more severe ones, too.