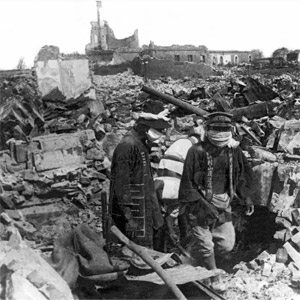 Survivors search the ruins from the devastating 1923 Yokohama earthquake and fire. There's a victim wrapped in white between the searchers.
Underwood Archives/Getty Images

Given that a wildfire generally occurs in the countryside or wilderness area, most people never come in direct contact with the blaze or its secondary features, such as fire tornadoes. There have been occasions, however, where fire tornadoes raged in heavily populated areas, damaging property and claiming lives. Three of the most infamous cases involve urban conflagrations of epic proportions. One case led to the first serious study of fire tornadoes. Here they are, chronologically:

Oct. 8, 1871 -- The Great Peshtigo Fire. You probably know about Mrs. O'Leary's cow and the fire that tried to remove Chicago from the map, but did you know the same fate befell Peshtigo, Wis. (and sections of Michigan)? The blaze that consumed the booming mill town started on the same day as the Chicago fire and as a result of the same conditions: a dry summer, slash-and-burn farming practices and a powerful cold front that swooped in from the western U.S., bringing strong winds that turned a few small prairie fires into a raging inferno. Peshtigo, which contained hundreds of wooden structures and lumberyards overflowing with cut timber and wood scraps, sat in the middle of thick stands of pine and hardwood. When the fire reached the town, it found a ready supply of fuel. In a matter of minutes, a massive fire tornado swirled around Peshtigo, generating 100-mph (161-kph) winds and ambient temperatures topping out at 700 degrees Fahrenheit (371 degrees Celsius) [source: Hemphill]. People who didn't make it to the river, died in the flames. It still ranks as the worst U.S. fire disaster, with a final death toll of 2,000 [source: Hemphill].

Sept. 1, 1923 -- The Great Kanto Earthquake. When tectonic plates shifted far beneath Sagami Bay, 30 miles (48 kilometers) south of Tokyo, on Sept. 1, 1920, they unleashed the double whammy typical of such events: a strong earthquake followed by a tsunami. Those two disasters alone claimed thousands of lives in Tokyo and Yokohama. But then came the fire, which roared through neighborhoods of wooden houses and forced residents to flee ahead of the flames. Thousands raced to the Sumida River, hoping to take refuge near the water, only to be cut off by a roiling, 300-foot-tall (91-meter-tall) funnel of fire the locals referred to as a "dragon twist" [source: Hammer]. Nearly 45,000 people perished in the fire tornado, leaving the final death toll at 140,000 [source: Hammer]. When the fire finally stopped, 45 percent of Tokyo had been burned to the ground [source: Hammer].

April 7, 1926 -- San Luis Obispo Fire. On the morning of April 7, 1926, during a moderate thunderstorm over San Luis Obispo, Calif., lightning struck oil reservoirs at a Union Oil Company tank farm located 2.5 miles (4 kilometers) south of the city's center. The discharge ignited the oil itself or vapors above the oil, leading to a five-day fire that consumed approximately 6 million barrels of petroleum. Over the course of the disaster, eyewitnesses observed hundreds of tornadoes erupting as a result of the blaze.

J.E. Hissong wrote about the strange meteorological phenomenon in the April issue of Monthly Weather Review, marking the first scholarly treatment of fire whirls and their formation. In that paper, Hissong reported that the fire whirls were directly responsible for property damage and loss of life:

One of these whirlwinds left the vicinity of the reservoirs and traveling east-northeast about 1,000 yards picked up the Seeber cottage, just outside the tank farm, lifting it several feet in the air and carrying it about 150 feet north, where it was dropped in a field, a total wreck. Mr. A.H. Seeber and his son, who were in the house, were killed.

Hissong's paper also featured several photos of the fire tornadoes -- some of the first ever recorded. Today, thanks to the ubiquity of video cameras and YouTube, fire tornadoes are appearing more frequently on film. 2012 footage of a fire whirl in the Australian outback, shot by filmmaker Chris Tangey, has racked up more than 2.5 million views on YouTube. Tangey's video shows a red-orange braid of fire twisting nearly 100 feet (31 meters) into the air. It's an awesome sight and a good reminder that fire tornadoes -- part beauty and part beast -- are always best observed from a distance.

A few months ago, an intense, but short-lived, storm raged through central and northern Virginia, knocking down trees and leaving a good deal of the state without power. When we woke in the morning, meteorologists described the storm as a derecho, a kind of thunderstorm during which winds blow in straight lines. It was both a new term and a new concept for me, proving once again that science has the power to surprise. I felt the same way about fire tornadoes. I mean, who knew?