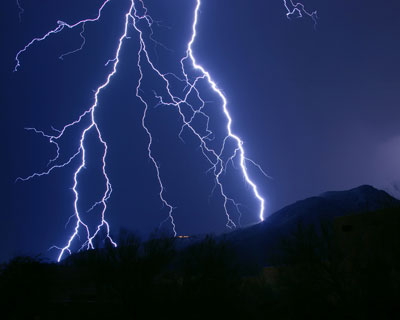 The first strike of lightning is generally followed by a series of secondary strikes, all within a split second.
© Photographer: Dan Mccauley | Agency: Dreamstime.com

Once the ionization process begins and plasma forms, a path is not created instantaneously. In fact, there are usually many separate paths of ionized air stemming from the cloud. These paths are typically referred to as step leaders.

The step leaders propagate toward the earth in stages, which do not have to result in a straight line to the earth. The air may not ionize equally in all directions. Dust or impurities (any object) in the air may cause the air to break down more easily in one direction, giving a better chance that the step leader will reach the earth faster in that direction. Also, the shape of the electric field can greatly affect the ionization path. This shape depends on the location of the charged particles, which in this case are located at the bottom of the cloud and the earth's surface. If the cloud is parallel to the earth's surface, and the area is small enough that the curvature of the earth is negligible, the two charge locations will behave as two charged parallel plates. The lines of force (electric flux) generated by the charge separation will be perpendicular to the cloud and earth.

Flux lines always radiate perpendicularly from the charge surface before moving toward their destination (opposite charge location). Given this knowledge, we can say that if the lower surface of the cloud is not straight, the flux lines will not be uniform. Try this: Draw two points on opposite ends of a basketball. Next, draw a line on the basketball that connects the two points. The curvature of the line is analogous to the flux lines in a non-uniform electric field. The lack of uniform force can cause the step leaders to follow a path that is not a straight line to the earth.

So now we have an electrically charged cloud with ever-growing step leaders stretching out toward the earth in stages. These leaders are faintly illuminated in a purplish glow and may sprout other leaders in areas where the original leaders bend or turn. Once begun, the leader will remain until the current flows, regardless of whether or not it is the leader that reaches the ground first. The leader basically has two possibilities: continue to grow in stages of growing plasma or wait patiently in its present plasma condition until another leader hits a target.

The leader that reaches the earth first reaps the rewards of the journey by providing a conductive path between the cloud and the earth. This leader is not the lightning strike; it only maps out the course that the strike will follow. The strike is the sudden, massive, flow of electrical current moving from the cloud to the ground.

Before we get ahead of ourselves, we have to consider what is happening with the surface of the earth and objects on the surface. We'll look at positive streamers and what happens when these streamers meet step leaders in the next section.