Lightning in 275 Words or Fewer 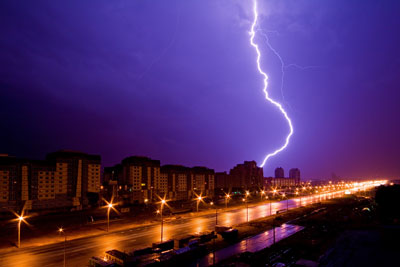 Sometimes it’s helpful to do a little recap, especially when you’re learning about a phenomenon as complex as lightning. In that vein, here’s our quick explanation of cloud-to-ground lightning strikes.

On Earth, lightning begins with the water cycle. As the sun heats the planet, moisture heads for the skies in the form of vapor. Given enough moisture, a cloud will form.

Eventually, an intense electric field can cause the air around the cloud to “break down,” or become ionized, allowing current to flow through the ionized air (or plasma) and potentially neutralize the charge separation. The path of ionized air is called a step leader.

Meanwhile, the positive charge is getting bigger on the Earth’s surface below, and objects (including people) respond locally to this strong electric field by sending out positive streamers.

When a streamer and a step leader meet, they can form a complete path for lightning to travel from the cloud to the ground (other types of lightning follow a slightly different process). After this fateful meeting, the lightning strike occurs.

Lastly, the air around the strike heats up and expands so much that it causes a shock wave in the form of a sound wave to radiate away from the strike path. That’s thunder.

Click over to the next page to learn more about lightning and other awesome forces of nature.