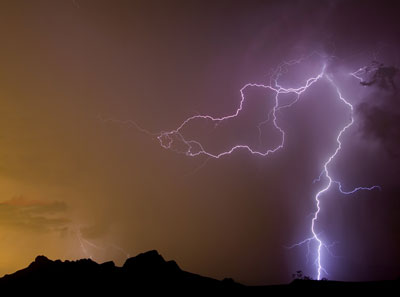 Looking at this bolt that resembles a dragon, it's easy to see why lightning was once viewed as supernatural.
© Photographer: Jerry Horn | Agency: Dreamstime.com

As the step leaders approach the earth, objects on the surface begin responding to the strong electric field. The objects reach out to the cloud by "growing" positive streamers. These streamers also have a purplish color and appear to be more prominent on sharp edges. The human body can and does produce these positive streamers when subjected to a strong electric field such as that of a storm cloud. In actuality, anything on the surface of the earth has the potential to send a streamer. Once produced, the streamers do not continue to grow toward the clouds; bridging the gap is the job of the step leaders as they stage their way down. The streamers wait patiently, stretching upward as the step leaders approach.

Next to occur is the actual meeting of a step leader and a streamer. As discussed earlier, the streamer that the step leader reaches is not necessarily the closest streamer to the cloud. It's very common for lightning to strike the ground even though there is a tree or a light pole or any other tall object in the vicinity. The fact that the step leader does not take the path of a straight line allows for this to occur.

After the step leader and the streamer meet, the ionized air (plasma) has completed its journey to the earth, leaving a conductive path from the cloud to the earth. With this path complete, current flows between the earth and the cloud. This discharge of current is nature's way of trying to neutralize the charge separation. The flash we see when this discharge occurs is not the strike -- it is the local effects of the strike.

When a leader and a streamer meet and the current flows (the strike), the air around the strike becomes extremely hot. So hot that it actually explodes because the heat causes the air to expand so rapidly. The explosion is soon followed by what we all know as thunder.

Thunder is the shockwave radiating away from the strike path. When the air heats up, it expands rapidly, creating a compression wave that propagates through the surrounding air. This compression wave manifests itself in the form of a sound wave. That does not mean that thunder is harmless. On the contrary, if you are close enough, you can feel the shockwave as it shakes the surroundings. Keep in mind that when a nuclear explosion occurs, typically the most destruction is caused by the energy of the rapidly moving shockwave. In fact, the shockwave that produces the thunder from a lightning strike can most certainly damage structures and people. This danger is more prominent when you are close to the strike, because the shockwave is stronger there and will dampen (decrease) with distance. Physics teaches us that sound travels much slower than light, so we see the flash before we hear the thunder. In air, sound travels roughly 1 mile every 4.5 seconds. Light travels at a blazing 186,000 miles (299,000 kilometers) per second.