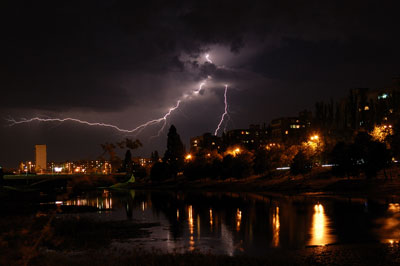 The tallest objects in a storm don't always get struck by lightning. Lightning can strike the ground at a close distance to a tall object.
© Photographer: Maksim Dyachenko | Agency: Dreamstime.com

The following description is also exactly what occurs when operating a Van de Graaff generator. If you have a hankering to play with lightning, a VDG is definitely the safest way to go and can provide hours of entertainment.

The strong electric field causes the air around the cloud to "break down," allowing current to flow in an attempt to neutralize the charge separation. Simply stated, the air breakdown creates a path that short-circuits the cloud/earth as if there were a long metal rod connecting the cloud to the earth. Here's how this breakdown works.

When the electric field becomes very strong (on the order of tens of thousands of volts per inch), conditions are ripe for the air to begin breaking down. The electric field causes the surrounding air to become separated into positive ions and electrons -- the air is ionized. Keep in mind that the ionization does not mean that there is more negative charge (electrons) or more positive charge (positive atomic nuclei / positive ions) than before. This ionization only means that the electrons and positive ions are farther apart than they were in their original molecular or atomic structure. Essentially, the electrons have been stripped from the molecular structure of the non-ionized air.

The importance of this separation/stripping is that the electrons are now free to move much more easily than they could before the separation. So this ionized air (also known as plasma) is much more conductive than the previous non-ionized air. Incidentally, the ability or freedom of the electrons to move is what makes any material a good conductor of electricity. Often times, metals are referred to as positive atomic nuclei surrounded by a fluid-like cloud of electrons. That makes many metals good conductors of electricity.

These electrons have excellent mobility, allowing for electrical current to flow. The ionization of air or gas creates plasma with conductive properties similar to that of metals. Plasma is the tool nature wields to neutralize charge separation in an electric field. Those readers who are familiar with the chemical reaction of fire will recall that oxidation plays an important role. Oxidation is the process by which an atom or molecule loses an electron when combined with oxygen. Simply put, the atom or molecule is changed from a lower positive potential to a higher positive potential. Interestingly enough, the process of ionization, which creates plasma, also occurs through the loss of electrons. By this comparison, we can view the ionization process as "burning a path" through the air for the lightning to follow, much like digging a tunnel through a mountain for a train to follow.

After the ionization process, the path between the cloud and the earth begins to form. Learn about step leaders, or paths of ionized air, next.

The tallest objects in a storm don't always get struck by lightning. It's true that taller objects are closer to the clouds, but as discussed previously, lightning can strike the ground at a close distance to a tall object. Taller objects may have a higher possibility of a strike, but where lightning is concerned, the strike path is not predictable.