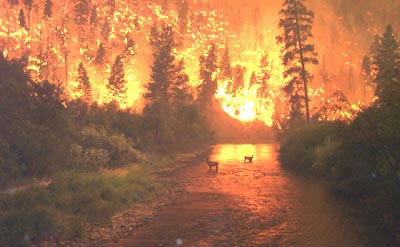 In just seconds, a spark or even the sun's heat alone can set off an inferno. Wildfires spread quickly, consuming thick, dried-out vegetation and almost everything else in their path. What was once a forest becomes a virtual powder keg of untapped fuel. In a seemingly instantaneous burst, a wildfire overtakes thousands of acres of surrounding land, threatening the homes and lives of many in the vicinity.

An average of 5 million acres burn every year in the United States, causing millions of dollars in damage. Once a fire begins, it can spread at a rate of up to 14.29 miles per hour (23 kph), consuming everything in its path. As a fire spreads over brush and trees, it may take on a life of its own -- finding ways to keep itself alive, even spawning smaller fires by throwing embers miles away.

After combustion occurs and a fire begins to burn, three factors control how the fire spreads. Depending on these factors, a fire can quickly fizzle or turn into a raging blaze that scorches thousands of acres. These three factors are:

Wildfires spread based on the type and quantity of fuel that surrounds them. Fuel can include everything from trees, underbrush and dry grass to homes. The amount of flammable material that surrounds a fire is referred to as the fuel load. Fuel load is measured by the amount of available fuel per unit area, usually tons per acre. A small fuel load will cause a fire to burn and spread slowly, with a low intensity. If there is a lot of fuel, the fire will burn more intensely, causing it to spread faster. The faster it heats up the material around it, the faster those materials can ignite.

Because vegetation is the primary fuel for wildfires, the Federal Emergency Management Agency (FEMA) recommends a minimum 30-foot safety zone around your home. You should:

A second zone, extending to 100 feet from the house, is also suggested. In this zone, you should lower the volume of vegetation and replace highly flammable trees and shrubbery with less flammable varieties.