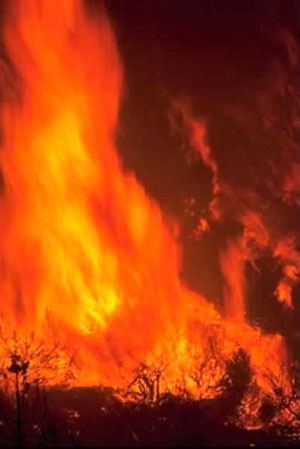 Fuel is a major factor in determining a fire's intensity.
Photo courtesy Bureau of Land Management

­Wi­ldfires spread based on the type and quantity of fuel that surrounds it. Fuel can include everything from trees, underbrush and dry grassy fields to homes. The amount of flammable material that surrounds a fire is referred to as the fuel load. Fuel load is measured by the amount of available fuel per unit area, usually tons per acre.

A small fuel load will cause a fire to burn and spread slowly, with a low intensity. If there is a lot of fuel, the fire will burn more intensely, causing it to spread faster. The faster it heats up the material around it, the faster those materials can ignite. The dryness of the fuel can also affect the behavior of the fire. When the fuel is very dry, it is consumed much faster and creates a fire that is much more difficult to contain.

Here are the basic fuel characteristics that decide how it affects a fire:

Small fuel materials, also called flashy fuels, such as dry grass, pine needles, dry leaves, twigs and other dead brush, burn faster than large logs or stumps (this is why you start a fire with kindling rather than logs). On a chemical level, different fuel materials take longer to ignite than others. But in a wildfire, where most of the fuel is made of the same sort of material, the main variable in ignition time is the ratio of the fuel's total surface area to its volume. Since a twig's surface area is not much larger than its volume, it ignites quickly. By comparison, a tree's surface area is much smaller than its volume, so it needs more time to heat up before it ignites.

As the fire progresses, it dries out the material just beyond it -- heat and smoke approaching potential fuel causes the fuel's moisture to evaporate. This makes the fuel easier to ignite when the fire finally reaches it. Fuels that are somewhat spaced out will also dry out faster than fuels that are packed tightly together, because more oxygen is available to the thinned-out fuel. More tightly-packed fuels also retain more moisture, which absorbs the fire's heat.