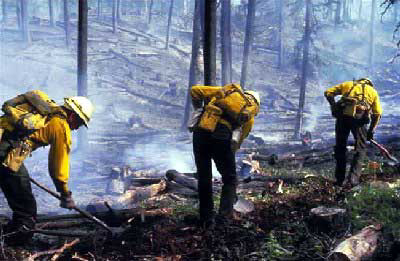 Firefighters build firebreaks like this one to remove potential fuel from a wildfire's path.
Photo courtesy Bureau of Land Management

­I­magine being inside an oven, wearing heavy clothing with smoke filling your lungs, and you can only begin to understand what it's like to fight a raging wildfire. Every year, thousands of firefighters put their lives at risk to battle merciless blazes. The elite, ground-based firefighters fit into two categories:

In addition to building firebreaks and dousing the fire with water and fire retardant, ground crews may also use backfires. Backfires are fires started by the ground crew that advance toward the burning wildfire. The goal of setting a backfire is to burn up any potential fuel in the path of the progressing wildfire.

While the Hotshots, Smokejumpers and other support crews fight the battle on the ground, they are given a lot of support from the air. Air tankers are often used to drop thousands of gallons of water and retardant onto fires. The red stuff that you often see being dropped from planes and helicopters is a chemical retardant that contains phosphate fertilizer, which helps to slow and cool down the fire.

Helicopters are also used as a method of attacking the fire from above. Carrying buckets that can hold hundreds of gallons of water, these aircraft fly over the fire and drop water bombs. Helicopters are also valuable for transporting firefighters to and from the fire.

Wildfires are powerful forces of nature that can burn for as long as they have fuel, oxygen and heat. The job of the firefighters is to eliminate one, if not all three, sides of the fire triangle to prevent further damage.

For additional information on wildfires and related topics, check out the links below.