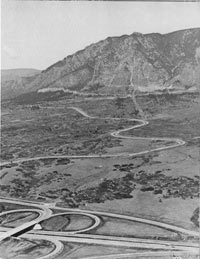 The technology NORAD used to accomplish its mission was made of three main parts:

­The first set of NORAD radar stations, the Pinetree Line, used pulse radar, which had trouble detecting planes close to the ground. The line, built in 1954, ran roughly along the U.S./Canadian border in the west, then cut across eastern Canada. This was too close to the potential targets of Soviet attacks to provide much advance warning. Pinetree was quickly supplanted by the Mid-Canada Line (MCL), which was positioned farther north. The MCL used Doppler radar, a more advanced technology that offered increased efficiency and low-altitude detection. The construction and early operations of these two systems actually predated the formation of NORAD by several months.

The Distant Early Warning (DEW) line of radar was built at almost the same time as the MCL. It stretched across Alaska, northern Canada and Greenland several hundred miles north of the Arctic Circle. Completed in 1958, the DEW line, like the Pinetree Line and MCL, was designed to detect Russian jet bombers. However, the transition to Intercontinental Ballistic Missiles (ICBMs) made these systems obsolete almost immediately [source: Talmadge]. MCL and Pinetree were no longer in use by the mid-1960s, while DEW stations were gradually shut down or converted to other uses, although some stations remained operational into the 1990s.

The Ballistic Missile Early Warning System (BMEWS) was NORAD's answer to ICBMs. Three massive radar installations in Alaska, Greenland and Britain make up the BMEWS, which went into operation in 1960 [source:Talmadge]. The BMEWS radar operated at such long range that its mission was expanded to include monitoring of orbital satellites. All three BMEWS stations are still in operation (following upgrades in recent decades), though the Alaskan station was converted into a PAVE PAWS installation. PAVE PAWS is the most modern NORAD air and space tracking system, first implemented in the 1980s.

Interpreting and combining the information from all these radar systems requires the use of sophisticated computer systems (at any given moment, been repeatedly upgraded over the decades). Each radar station is connected to NORAD command and control by redundant communications systems, using hardwired connections and satellites as well as microwave communications.

Today, NORAD is able to track virtually every inch of North American air space and can detect missile launches almost anywhere in the world, using satellites to spot heat signatures and exhaust plumes. In addition, NORAD tracks all man-made objects in space. All of this information is cross-referenced with civilian and military air traffic control. As a result, NORAD can quickly detect an unauthorized aircraft. Many of these turn out to be drug smugglers -- about 100 are caught each year with NORAD's help [source: Above Top Secret].

The impressive, seemingly all-seeing eyes of NORAD have inspired fiction writers and film directors to replicate the agency in their works. NORAD's most famous film role was in the movie "War Games" -- much of the film is set in NORAD's Cheyenne Mountain headquarters, and the plot revolves around a computer hacker who infiltrates NORAD's computers. NORAD also plays a major role in the "Terminator" movies as the source of the computer system that achieves sentience and decides to eliminate humanity.