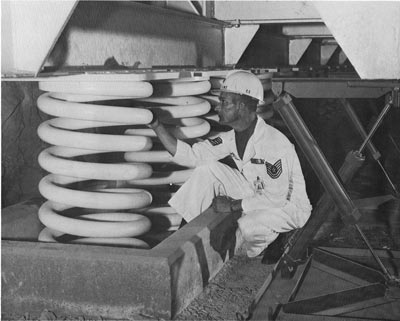 The most famous part of NORAD is probably the NORAD headquarters and control center. The United States wanted a control center that could be temporarily self-sufficient and withstand a nuclear attack, so it hollowed out a granite mountain in Colorado to house it. The Cheyenne Mountain complex is enclosed by 25-ton steel blast gates and hundreds of feet of solid granite. The inner area is a series of large chambers covering more than four and a half acres [source: Talmadge]. Within the chambers are buildings, built as freestanding structures within the mountain. Each building rests on immense coiled steel springs for isolation from the seismic shock of a nuclear blast (they work against earthquakes, too). Each of the 900 springs weighs 1,000 pounds [source: Hough]. Extensive ventilation systems provide fresh air, while food stores and natural water springs can provide sustenance for up to a few weeks. The center does have a generator, but it draws power primarily from the local electric grid.

Construction of the complex began in 1961 and cost $35.5 million for the first phase. It took three years and more than a million pounds of explosives just to hollow out the mountain [source: ­Hough]. Ultimately, Cheyenne Mountain cost hundreds of millions of dollars to maintain and upgrade. As of 1994, annual operating costs for the facility were $152 million [source: Above Top Secret].

More than 1,800 people once worked within the mountain, but in 2006 NORAD's operations were shifted to Peterson Air Force Base in Colorado Springs. A skeleton crew continues to maintain the Cheyenne Mountain complex in a "warm standby" state, ready for use as a backup whenever it may be needed.

Until recently, the Canadian NORAD headquarters was also centered in an underground complex. It was located in North Bay, Ontario, and housed most of the computer and communications systems. The Canadian NORAD command also uses a military base in Winnipeg, Manitoba, which serves as the administrative headquarters [source: National Defence of Canada].

On the next page we'll learn about what happens if NORAD spots a missile coming toward the United States.

With its high-tech tracking systems, it only makes sense that NORAD would be aware of Santa Claus as he makes his way from the North Pole to visit children throughout the world each year. However, the idea of tracking Santa didn't occur to anyone until 1955, when a "Santa's hotline" phone number was published incorrectly, diverting callers to a NORAD precursor. During the Cold War, NORAD would send Air Force jets to confirm that the unidentified "bogie" was, in fact, a jolly man in a sleigh pulled by flying reindeer.

Today, Canadian fighter jets provide Santa with an honor guard, and hundreds of volunteers operate NORAD phones to tell callers worldwide where Santa is at any given moment. He can even be tracked on the Internet at Norad Tracks Santa.