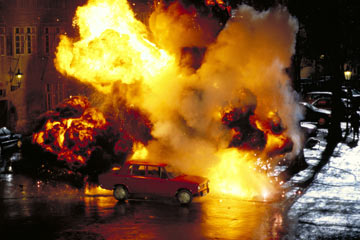 The simple answer is: No, you cannot outrun an explosion. But it may depend on how close you are to the explosion when you start running. And how fast you are.

A C-4 explosion, for example, is virtually instant. Gases are released from the explosive at the super speedy rate of 26,400 feet per second (8,050 meters per second), pummeling everything in its immediate wake. In other words, if you are within 26,400 feet or so of an explosive, you will get hit by the blast within one second, assuming it is powerful enough to reach you [source: Harris].

By comparison, Jamaican sprinter Usain Bolt set a world record at the Beijing Olympics by running 200 meters (656 feet) in 19.30 seconds. That's about 10.4 meters or 34 feet per second. On the set of a real-life action flick, Bolt's lightning fast pace would not have prevented him from going up in flames, so to speak [source: Olympic.org].

That's assuming that Bolt or any other explosion racer is standing in the vicinity of the blast. Of course it is possible "outrun" an explosion if you are already pretty darn close to a safe distance away.

According to the U.S. Department of Homeland Security, the minimal safe distance from a 5-pound (2.2 kilogram) pipe bomb is 1,200 feet (360 meters). "Minimum evacuation distance is the range at which a life-threatening injury from blast or fragmentation hazards is unlikely," the department explains, adding that a person within the safe zone may still suffer injuries that are not life-threatening. The evacuation distance rises with the size of the explosion, from a 50-pound (22-kilogram) briefcase bomb (1,850 feet or 564 meters) to a 1,000-pound (453-kilogram) explosive device in a van (2,400 feet, 732 meters) and a 60,000-pound (27,180-kilogram) tractor trailer bomb (9,300 feet, 2,835 meters).

In other words, should you find yourself rappelling an exploding skyscraper from a dangling fire hose, you're likely to come out with more than just a crispy, interestingly-colored undershirt.

Still thirsting for some high-powered action? Check out the links that follow for more information on C-4, bomb sniffing and even internal human "explosions."

Author's Note: Can you really outrun an explosion?

Sure, Willis' leap from the Nakatomi Plaza in "Die Hard" was as enjoyable as it was unbelievable. And who doesn't get a kick out of watching the great Nic Cage walk away from a ridiculous, over the top and completely unnecessary blast in just about any of the ridiculous, over the top and unnecessary performances he's turned in over the years. But for my money, the best cinematic portrayal of "outrunning" an explosion is the car blast scene from Martin Scorsese's Oscar-nominated mafia tale, "Goodfellas." As a young Henry Hill (later played by Ray Liotta) explains his early entry into life in the mob, his Mafioso exploits rise from running errands for the bosses to hocking stolen cigarettes and later dropping a couple Molotov cocktails in a lot full of parked cars. The impressive part of this scene is not the explosion itself, it's that Hill sprints away in a suit and a pair of expensive loafers. It's one thing to survive an explosion. It's another to do it without scuffing your Bruno Maglis.