The Columns Supporting the Periodic Table 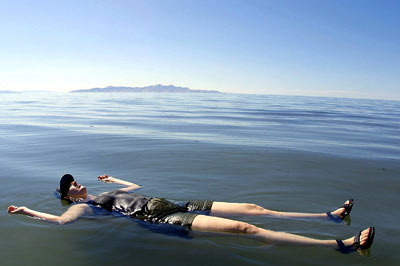 Sodium, one of the elements that makes the Great Salt Lake so salty and nice to float on, belongs to the alkali metal group.
George Frey/AFP/Getty Images

­The columns that comprise the periodic table are called groups -- 18 in total. Groups indicate elements with similar chemical and physical properties. About 80 percent of the elements are metals (shiny elements that conduct heat and electricity well), and 15 percent of the elements are nonmetals (poor conductors of heat and electricity). The remaining elements are metalloids, which share properties of both metals and nonmetals. Let's look at some of these element cliques and remember, sometimes group members are spread around the table, not necessarily in one neat column. For example, hydrogen looks like it should belong to group 1, the alkali metals, but it actually prefers the company of nonmetals.

Alkali metals (group 1 or IA) such as lithium, sodium and potassium, are highly reactive and aren't usually found freely in nature. They get their name from their chemical reactions with water in which they produce highly alkaline substances such as sodium hydroxide or lye. They have one valence electron (or outermost electron that's farthest from the nucleus), which they give up in chemical reactions. Sodium gas fills streetlights, while sodium liquid is used to transfer heat in certain types of nuclear reactors.

Alkaline earth metals (group 2 or IIA) include magnesium, calcium and barium among others. These elements have two valence electrons, which they yield in chemical reactions. Although they're less reactive than alkali metals, they're not usually found alone in nature. For example, calcium combines with carbon to make calcium carbonate, which makes up limestone, marble and seashells. Teeth and bones are also made of calcium compounds. Beryllium contributes to the bling found in the gemstones aquamarine and emerald.

Lathanoids and actinoids (group 3 or IIIB) include shiny metals (lanthanide series or rare earth elements) and radioactive elements (actinide series). Lanthanoids are abundant in the Earth's crust, but difficult to separate from their compounds. All of the actinoids are radioactive, but only actinium, thorium, protractinium and uranium are found naturally. The other actinoids are made in nuclear reactors and particle accelerators.

Transition metals (groups 4-12 or IB, IIB and IVB-VIIIB) are all shiny metals that are found naturally, but are less reactive than groups 1 and 2. Electrons of the outermost s orbital and the inner d orbital can participate in chemical reactions. They include elements that we usually think of as metals, like iron, nickel, chromium and precious metals such as gold, copper, silver and platinum.

Metals are located mostly in group 13 (IIIA) and some in groups 14-16 (IVA - VIA). Metals include aluminum, tin, lead and bismuth. Metals are harder and denser than those in groups 1 and 2, but softer and less dense than the transition metals. Most of them are found as compounds in nature, but can exist freely once refined, as aluminum does.

Noble gases (group 18 or VIIIA) include helium, neon, argon, krypton, xenon and radon. Helium, of course, fills balloons and blimps. Neon, argon and xenon are used in lights. Radon is a product of radioactive decay from the Earth and comes up through the soil into your home. The noble gases are also called inert gases because they don't react chemically with other elements. Why not? The orbitals of their highest energy level are filled with electrons. Thus sated, they tend not to take or share their valence electrons with other elements.

You're not quite done yet. Metalloids and nonmetals round out the groups. Nonmetals can form compounds by sharing valence electrons with each other or swiping them from metals. One group of nonmetals (17 or VIIA) are highly reactive and called halogens (fluorine, chlorine, bromine, iodine and astatine).

How can all of this information help you detect some trends among Earth's elements?