Trends in the Periodic Table 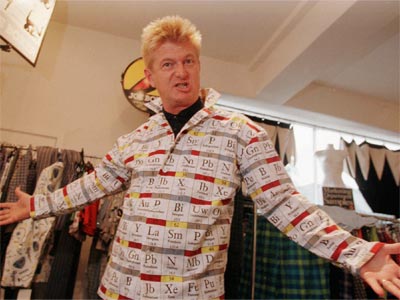 In case you're not satisfied with just a plain old printout of the periodic table, you can also buy shirts, beach towels, mugs and tattoos of the trusty chart.
AP Photo/Eric Risberg

­It's handy to know about what group a particular element resides in and what its atomic structure is like, but that's not all the periodic table has to tell you. If you're looking at it, you're casually taking in work that scientists have spent lifetimes struggling with. And if you look at the table as a whole, some big trends start to emerge that tell us how one element will react with another.

Before we can see these trends, a quick chemistry recap might be good. First, metals react with nonmetals to form ionic compounds. The nonmetal atom takes one or more valence electrons from the metal atom. When an atom gains or loses a valence electron, it forms an ion. An ion with more protons than electrons is positively charged and called a cation (comes from the metal). An ion with more electrons than protons is negatively charged and is called an anion (comes from the nonmetal). In the end, both ions have a full outer energy level. Second, nonmetals tend to share electrons so that both atoms have full outer energy levels; they form covalent compounds. But how do you know which element will react with which to produce an ionic or a covalent compound? That depends on a few factors:

Let's see how these factors can help predict what type of chemical reactions any two elements will make.

If you look at the periodic table, ionization energy tends to decrease as you move down a column and increase as you move across a period from left to right. When you compare elements in groups 1 and 2 (on the left) with those in 16 and 17 (on the right), you'll find that the elements in the first groups have lower ionization energies, won't hold on to their valence electrons as tightly and will tend to form cations. So, elements in groups 1 and 2 will tend to form ionic compounds.

It's hard to believe that one measly sheet of paper can contain that much information.