IUPAC: The Gatekeeper of Elements 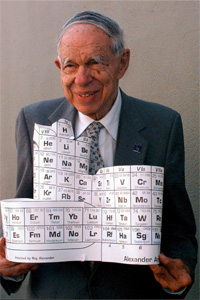 Dr. Glenn Seaborg, the physicist who discovered plutonium and the man behind the element Seaborgium, holds a gift sculpted by a fan. Who says science isn't rewarding!
AP Photo/Susan Ragan

­The International Union of Pure and Applied Chemistry (IUPAC) oversees the periodic table of elements, which, as of November 2011, consisted of 112 officially named elements, like seaborgium and regular old potassium.

The last elements to be discovered had atomic numbers of 112, 114, 116 and 118. They are unofficially called ununbium (Uub), ununquadium (Uuq), ununhexium (Uuh) and ununoctium (Uuo), respectively -- Greek for the atomic numbers of these elements. There are spots in the periodic table for elements with atomic numbers 115 and 117, but these elements haven't been discovered, much like Mendeleyev left gaps in his table for elements that hadn't turned up yet. Of course, nothing in science is static, so it's always good to check with IUPAC if you're unsure about whether an element is official or not.

Ununquadium doesn't exactly roll off the tongue, so how does an element get a new title and achieve official status? And are there any naming restrictions? Is christening an element after a beloved pet strictly frowned upon, but after a hometown or lab location accepted?

Remember that the new elements are all radioactive ones that are made in particle accelerators and have short lives before they decay into another element. In addition, any new element discovered must have a lifetime greater than 10-14 seconds. Two difficulties exist in confirming these new elements: First, they're not produced in large quantities, and second, they don't last very long. That means it's a long, difficult road to verify the claim that a new element has been discovered. But the procedure for naming an element is as follows:

­Many people have made different representations of the periodic table, such as spiral forms, 3-D forms, even a humorous "Periodic Table of the Elephants" that features a cartoon elephant with a slightly different take on the elements. For example, the helium block features an elephant balloon filled with helium and the beryllium block features a cold elephant -- Brrr-illium. Get it? Still, none of these twists on the periodic table have yet proved as useful as the standard form that you see in any chemistry textbook today.

If you're ravenous for more elemental reading, keep reading for links to articles on aluminum, lead and more next. 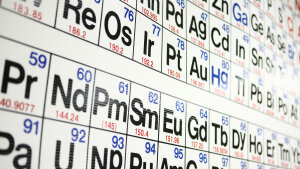