Inside the Prototype Integration Facility 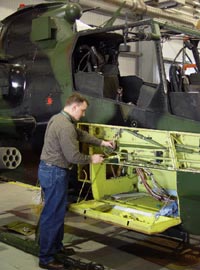 An engineer works on vehicles inside one of the two PIF bays.
Courtesy U.S. Army

­One o­f the first challenges the Army faced when forming the PIF was geographic in nature. The EAP Lab and the Prototype Engineering Directorate weren't located in the same building. Neither group had the facilities that the other group would need for efficient operation. The Army decided to construct a new building to house the joint operation.

That new building is Building 5405 at the Army post at Redstone Arsenal, Ala. The Army secured $9.9 million in funding to build the new structure. The PIF is a 60,000-square-foot (5,574-square-meter) facility. It has two large construction bays inside it -- one is a 12,975-square-foot (1,205-square-meter) bay and the other measures 10,000 square feet (929 square meters). The facility also has a pair of heavy duty cranes and a helicopter landing pad [source: Chronister].

The large bays give engineers the room they need to work on equipment like tanks or helicopters. In addition to these features, the PIF also has multiple laboratories and fabrication facilities. For example, there's a complete circuit card design and layout lab inside the PIF. The PIF also has the capability to do the following:

In short, the PIF has all the equipment and resources a team would need to construct prototypes from design to fabrication.

But the equipment and facilities of the PIF are only part of the equation. The other part is the people -- the project teams that work on building prototypes for the army. As you might imagine, the PIF has a very structured chain of command.

At the top of this chain is the PIF Manager, who reports to the Deputy Director of the Engineering Directorate. The departments that report to the PIF Manager include project management teams, manufacturing, engineering, quality assurance, and business and operations management.

There are four kinds of project management teams: aviation systems, missile systems, special projects and research and development. Most of the work coming through the PIF relates to aviation or missile systems. These teams work together to manage projects. The PIF can shift resources from one group to the other as demands change over time.

The other departments are pretty self-explanatory. Engineering designs the prototypes, manufacturing builds them and quality assurance makes sure the prototypes meet all requirements. The business and operations management department oversees facility operations (including scheduling) and business relationships between the PIF, its customers and its project partners.

We'll take a closer look at the process for developing prototypes in the next section.