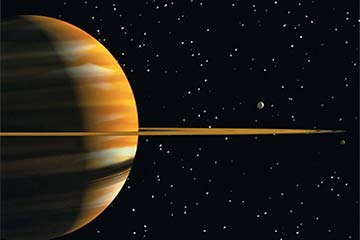 Would you believe that diamond rain might fall on Saturn?
Denis Scott/Getty Images

Here on Earth, we're used to a certain kind of weather. It might be unpredictable and scary at times, but at least we know that everything falling out of our atmosphere and onto the ground is water in some form or another. You'd be excused, therefore, for thinking "water" when considering the question of rain on other planets. But you'd be wrong all the same -- Earth is the only planet that has liquid water. There is indeed rain falling from clouds on other planets, but it's not water. Not even close.

Let's start with perhaps the most intriguing substance that might be raining down on a number of planets. Diamonds. Yes, diamonds. About 1,000 tons (907 metric tons) a year fall on Saturn [source: Morgan]. But before you start devising a way to make a fortune by collecting diamonds in outer space, we need to tell you that this isn't a cold, hard fact. It's still an unpublished theory -- a theory by planetary scientists at the NASA Jet Propulsion Laboratory, but unproven nonetheless.

According to the findings, diamond rain falls on Saturn, Neptune and Jupiter, among others, but Saturn might have the best conditions for it. Saturn's intense lightning storms (10 strikes per second!) can cause the methane molecules in its atmosphere to break up, leaving carbon atoms to float freely and start falling to the ground [source: Jaramillo]. They transform into graphite as they travel through Saturn's dense, layered atmosphere and eventually get pressurized into tiny diamond pieces (most are less than a millimeter in diameter). But about 22,000 miles (36,000 kilometers) in, things get too hot and the diamonds decompose into a mushy liquid [source: Dattaro].

Not into diamonds? Head to Venus for some refreshing, incredibly hot sulfuric acid rain. Venus' atmosphere is full of sulfuric acid clouds, but because the surface of the planet hovers at a balmy 894 degrees Fahrenheit (480 Celsius), the rain only gets about as close as 15.5 miles (25 kilometers) to the surface before it becomes a gas [source: Hammonds].

Over on Titan, Saturn's largest moon, there are icy methane rainstorms. Just as Earth has a water cycle, Titan has a methane cycle: There are seasonal rains, the methane rain fills up lakes, the lakes eventually evaporate and the vapor ascends into the clouds, starting the whole thing over again. Methane is in its liquid form on Titan because the surface temperature is an extremely chilly minus 290 degrees F (minus 179 C) [source: Space.com]. There are also solid-ice mountains on Titan.

These cases are just the start of the conversation about rain on other planets. We didn't even get into dry-ice snow on Mars, liquid helium rain on Jupiter and plasma rain on the sun. It's fascinating stuff, but we'll leave the horrific flesh-melting precipitation to the rest of the solar system, please. We're just fine stuck with good old lukewarm rainwater.