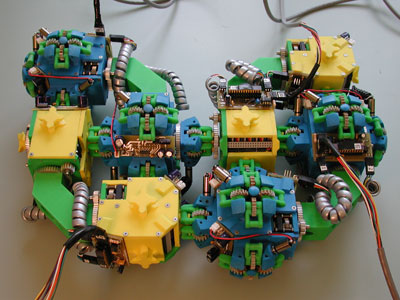 The basic idea of a lattice robot is that swarms of small, identical modules that can combine to form a larger robot. Several prototype lattice robots already exist, but some models exist only as computer simulations. Lattice robots move by crawling over one another, attaching to and detaching from connection points on neighboring robots. It's like the way the tiles move in a sliding tile puzzle. This method of movement is called substrate reconfiguration – the robots can move only along points within the lattice of robots. Lattice modules can either have self-contained power sources, or they can share power sources through their connections to other modules.

Lattice robots can move over difficult terrain by climbing over one another, following the shape of the terrain, or they can form a solid, stable surface to support other structures. Enough lattice robots can create just about any shape. Computer simulations show them changing from a pile of parts to a teacup and from a dog to a couch. The modules can combine to make flat surfaces, ladders, movable appendages and virtually any other imaginable shape. So a lattice robot is more like a Terminator T-1000 than a Transformer.

Swarm-bots can maneuver independently, or they can combine to complete tasks they could not perform alone.
Image courtesy Professor Marco Dorigo

Like lattice robots, mobile reconfiguration robots are small, identical modules that can combine to form bigger robots. However, they don't need their neighbors' help to get from place to place – they can move around on their own. Mobile configuration robots are a lot like cartoon depictions of schools of fish or flocks of birds that combine to create a tool or structure. They move independently until they need to come together to accomplish a specific task. Swarm-bots, a project by the Future and Emerging Technologies program in the European Union, are mobile reconfiguration robots.

Even though these robots look very different from one another, they have many similarities in how they move and operate. We'll look at these next.

Transformers aren't necessarily practical or even possible on a large scale. But engineers at Himeji Soft Works have developed a small-scale robot that really turns from a car to a biped and back. You can see a video of this robot, including its transformation, at YouTube.