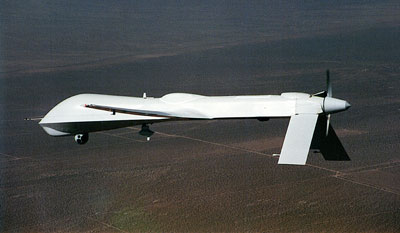 This Predator is capable of carrying and firing weapons like the Hellfire missile. Its design provided the inspiration for the Reaper.
General Atomics/Getty Images

The U.S. Department of Defense (DOD) spent more than $3 billion in unmanned aerial vehicle (UAV) research and operations in the 1990s [source: DOD]. Considering that a B-2 bomber alone costs around $1.5 billion, it wasn't a bad investment: Today, UAVs play a very important role in military engagements in Afghanistan and Iraq as well as surveillance missions across the globe.

The MQ-1B Predator, an unmanned, lightly armed surveillance aircraft, is the direct predecessor of the MQ-9 Reaper. The Predator has a 49-foot (14 m) wingspan and can climb to about 25,000 feet (7.6 kilometers). There are somewhere between 320 and 400 individual Predator drones in use today [source: Air Force]. The use of UAVs like the Predator and the Reaper is growing rapidly within the Air Force, and other branches of the military are showing interest in them as well. The Air Force intends to double its use of the Predator by 2010 and will quadruple the number of UAV air crews it trains each year [source: Broshear].

The MQ-1 Predator unmanned drone was introduced in 1996 and was first used in a war zone during the 78 days of the 1999 Kosovo conflict. About two dozen UAVs (Predators as well as other models) were used for surveillance purposes during NATO air operations over Kosovo, and nine of them were shot down [source: Wall Street Journal].

In February 2001, the Predator served its first offensive purpose, successfully firing an armed Hellfire missile in a test trial. It destroyed an unoccupied target tank in the process. One year later, a missile fired from a Predator killed an alleged planner of the 2000 attack on the USS Cole in Yemen. Five other suspected al-Qaida members also died in the attack. It was a display not only of the Predator's power but also its wide-ranging command-and-control configurations: The U.S. pilot operating the Predator was stationed in Djibouti, while the commander overseeing the operation was in Saudi Arabia. If you're interested in learning more in-depth information about the Predator drone, read How the Predator UAV Works.

As the military campaigns in Iraq and Afghanistan and the hunt for al-Qaida members continued, the United States found more use for the offensive strike capabilities the Predator offered. Though it was designed to be an eye in the sky, military planners have retrofitted the Predator with a little muscle as well. Armed Predators are officially designated MQ-1Bs. Though they're armed relatively lightly with only two Hellfire missiles, Predators are lethal and have been responsible for killing both high-level targets in Iraq and Afghanistan as well as possible targets, such as insurgents spotted planting roadside bombs.

Aside from a quick ambush of an unsuspecting target, Predators don't pack much of a punch. Enter the MQ-9 Reaper, which was designed to address this issue. While the Predator is a surveillance platform with weapons capabilities, the Reaper is a hunter/killer with surveillance capabilities.

The 140 mph (225 km/h) speed of a Predator is suitable for hovering back and forth in the skies in search of troop movements, the coordinates of which can be called in to a nearby fighter jet. The 300 mph (482 k) top speed of a Reaper, on the other hand, is better suited for quickly targeting and destroying enemy personnel and vehicles that are on the move. The Reaper can fly about nine times farther and twice as high as the Predator, and it doesn't require any fighter jets for backup. It proved its muscle when it began flying missions in October 2007.

Now that we know a little about the lineage of the Reaper, we'll learn more about what it's capable of next.

The Pathfinder is a solar-powered UAV that was built in the 1990s for civilian purposes, such as collecting weather and climate data. It has recorded reaching heights of 67,350 feet (20.5 kilometers), a record for solar aircraft [source: NOVA].