The Reaper: A Multitasking Bird of Prey 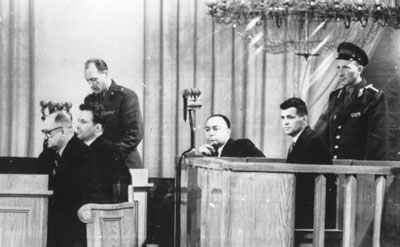 Accused of espionage over Russia in his U-2 surveillance plane, Gary Powers attends his trial in Moscow on Aug. 18, 1960.
Keystone/Getty Images

In 1960, the Soviet Union shot down U.S. U-2 surveillance plane and captured its pilot, Gary Powers. The USSR tried, convicted and imprisoned Powers and used the incident to score propaganda points at home and abroad. This incident sheds quite a bit of light on the advantages of using unmanned surveillance flights over unfriendly territory.

But with the many advantages of such a powerful piece of equipment come just as many precautions and responsibilities. The Reaper's main purpose is to hunt and kill enemy combatants constantly. It's also used to provide reconnaissance data to military and government officials. The 42nd Attack Squadron of the U.S. Air Force currently operates all of the Air Force's Predator and Reaper UAVs out of Creech Air Force Base in Nevada. This is quite a responsibility: The unmanned drones are used more in Iraq and Afghanistan than any other Air Force weapons system [source: Broshear].

The Reaper can be outfitted with different mission kits, depending on what its mission will be. For instance, it can be equipped with a mix of weapons and surveillance equipment, depending on whether the mission is to destroy an enemy convoy or secretly locate a remote base in the Afghani mountains. On the other hand, it can be armed with four Hellfire missiles and a pair of 500-pound (226-kilogram) laser-guided bombs or various other configurations.

The dual purpose of the Reaper is best understood when it's compared to the Predator in action. In June 2006, a Predator tracked and located Abu Musab al-Zarqawi, the leader of al-Qaida, in Iraq. However, the Predator flight crew had to request assistance with the mission from an F-16 because the Predator didn't have enough explosive ordnance to destroy the safe house where al-Zarqawi was hiding. It turned out that the al-Qaida leader was killed by the F-16, but the delay could have allowed him to make a getaway. With this type of scenario in mind, the Reaper was designed to eliminate any delay in tracking a target and striking it -- it can do both.

The UAV's original purpose was reconnaissance, and although its design has shifted to reflect an emphasis on attack, Reapers are adept at high-flight spying. This ability can be put to use in several ways. Unmanned reconnaissance flights remove some of the burden of manned flight crews when around-the-clock surveillance is needed, such as the enforcement of the no-fly zones over Northern and Southern Iraq that began in the 1990s. UAVs can also search for suspected weapons sites, mass graves or movement of military troops or equipment.

A variety of sensors onboard the Reaper provide real-time data for operators to analyze. The Reaper has infrared capabilities and can provide color video images during daylight flights or image-intensified video at night. Various imaging capabilities can also be viewed separately, or the video streams can be fused. The Reaper's data collection equipment sends back live feeds, enabling military and government officials to react immediately to ongoing developments or rapidly changing situations. The pilot may be in audio communication with a commanding officer or personnel on the ground, who can request a flyover of a nearby hostile area to gain information or to give leads to the pilot about possible enemy locations. Live satellite images can even be beamed down to a field commander's laptop.

The Reaper is being used in battle zones and manhunts in Iraq and Afghanistan. Use of the weapons system could be more widespread than that, but because the Reapers' missions are carried out covertly, we can't be sure. In the next section, we'll look at a few ethical and legal issues surrounding the use of the Reaper MQ-9.