A Brief History of UAVs 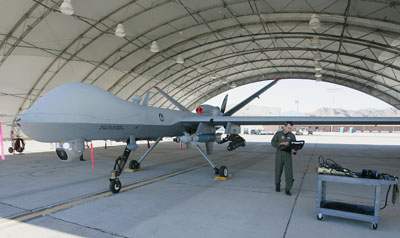 Air Force Maj. Casey Tidgewell gets an MQ-0 Reaper ready for a training flight at Creech Air Force Base in Indian Springs, Nev. The Reaper has a long line of UAV predecessors.
Ethan Miller/Getty Images

Using bats to carry incendiary bombs into enemy territory wasn't a good idea, and it wasn't the first bad idea in the history of unmanned aerial vehicles (UAVs). During the American Civil War, an inventor patented an unmanned balloon that carried explosives that could be dropped after a time-delay fuse mechanism triggered the basket to overturn its contents. Air currents and weather patterns made it difficult to estimate for how long to set the fuse, and the balloon was never successfully deployed.

By 1883, the first aerial photograph was taken using a kite, a camera and a very long string attached to the shutter-release of the camera. In 1898, this technology was put to use in the Spanish-American War, resulting in the first military aerial reconnaissance photos.

World War I saw the development and testing of various radio-controlled unmanned aircraft, but none emerged from the testing phase in time to be used before the war ended.

­In the­ 1930s, the British Royal Navy developed a primitive, radio-controlled UAV: the Queen Bee. The Queen Bee could be landed for future reuse and could reach speeds of 100 mph (160 km/h). Instead of being used offensively though, the Queen Bee primarily served as aerial target practice for British pilots.

During World War II, Nazis developed a UAV to be used against nonmilitary targets. The Revenge Weapon 1, an unmanned flying bomb better known as the V-1, could reach speeds of almost 500 mph (804 km/h), carry 2,000 pounds (907 kilograms) of explosives and could travel 150 miles (241 kilometers) before releasing its ordnance. Its wingspan was about 20 feet (6 m), and it measured nearly 25 feet (7.6 m) long. In towns and cities across Britain, the V-1 was responsible for more than 900 civilian deaths and 35,000 injured civilians [source: NOVA].

In the 1960s and 70s, the United States flew more than 34,000 surveillance flights using the AQM-34 Ryan Firebee, a UAV launched from a host plane and controlled by operators within that plane. The U.S. also employed UAVs called Lightning Bugs that were released from airborne C-130s for missions over China and Vietnam. Engineers from the manufacturer operated the aircraft with a joystick control.

In the late 1970s and 80s, Israel developed the Scout and the Pioneer, which represented a shift t­oward the lighter, glider-type model of UAV in use today. The Scout was notable for its ability to transmit live video with a 360-degree view of the terrain. The small size of these UAVs made them inexpensive to produce and difficult to shoot down.

The U.S. acquired Pioneer UAVs from Israel and used them in the Gulf War. On at least one occasion, Iraqi soldiers attempted to surrender to one of the UAVs as it flew overhead [source: NOVA]

­Although UAV technology saw sporadic development throughout the 20th century, it wasn't until the Predator drone arrived on the scene that unmanned aerial vehicles earned a permanent place in the arsenal. To understand the Reaper, it'll help us to know a little about its direct predecessor, the MQ-1 Predator. We'll read about this landmark UAV next.

The Israelis obtained Ryan Firebees from the U.S. to use during the 1973 Yom Kippur War. The UAVs were used successfully to spur Egypt into firing its entire a­rsenal of anti-aircraft missiles at the Firebees. This mission was accomplished with no injuries to Israeli pilots, who soon swooped in over the depleted defenses.