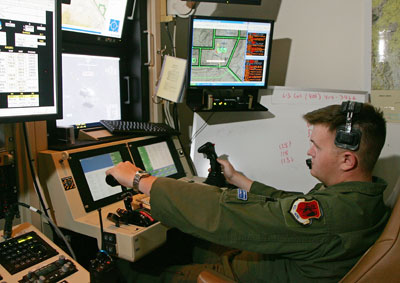 As of June 2008, there were 27 U.S.-operated unmanned aerial vehicles (UAVs) in the air around the clock. But with no pilots in the aircraft, how was this possible? The MQ-9 Reaper is more than a drone: It's a weapons system. As such, when it's in operation, various people and facilities must be in close coordination.

Let's examine a basic drone flight for a moment, starting with its location at a military base in Iraq. Each Reaper drone is operated remotely by a team of two: a pilot and a sensor operator. The pilot's primary function is flying the plane, while the sensor operator monitors the performance of the many different sensor systems (like infrared and night-vision cameras) utilized by the Reaper.

The Reapers are deployed in groups of four. Each Reaper -- which is similar in size to a small business jet -- is controlled by its own two-airman team located at a ground control station. This station may be located in the theater of operations, like Balad Air Base in Iraq, or it may be located far from the flight path, such as at the Creech Air Force Base in Nevada. (British flight teams also operate their Reapers from the Air Force's UAV control center in Nevada).

The teams are actually able to switch control of the drone midflight. So a team at an airbase in Iraq may be responsible for takeoffs and landings from its base but then hand over control to a team in the United States. Why would they do this? Remember that the operation of these UAVs is in motion 24 hours a day. It's more efficient to have some teams dedicated to getting them airborne and bringing them back down safely and others dedicated to fulfilling specific missions. This way, there are fewer teams overseas landing drones all day and more teams based in the United States who are responsible for the Reaper during the duration of its mission, which might last as long as a full 24-hour day. A crew responsible for takeoffs and landings may have absolutely no idea where the aircraft has been in the interim period.

During a training mission at Creech Air Force Base, a pilot's display at the ground control station shows a truck from the view of a camera on an MQ-9 Reaper.
Ethan Miller/Getty Images

In the beginning of the Royal Air Force's involvement with the Reapers, only combat pilots in top physical form (without even a hint of a common cold) operated the Reapers, though their American counterparts needed only a second-class medical certificate [source: Almond]. On the other hand, some nations have less exacting standards for drone-operators than they do for fighter pilots. Medical issues that may disqualify some military members from further flight operations in a jet may extend their career flying a drone. The use of drones allows nations to maintain a presence in the sky with less strain on the pilots' families as well, since the pilots aren't necessarily in the middle of a war zone.

The crews receive visual information about the Reaper's surroundings by way of satellite link. The pilot is able to fly the craft using the color feed provided by the camera located in the front portion of the Reaper. What's more, the Reaper can transmit surveillance footage directly onto soldiers' laptops in the field.

In the next section, we'll look at some of the different tasks a Reaper can carry out.