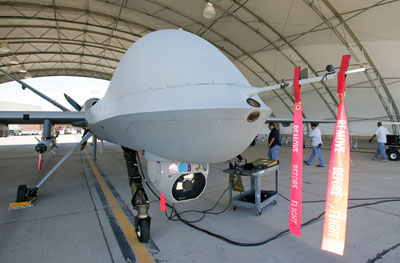 Mechanics get a Reaper ready for a training flight at Creech Air Force Base.
Ethan Miller/Getty Images

The use of unmanned weapons systems brings up several ethical and legal issues. While the Reaper provides its operators with greater safety than manned aerial vehicles, it's actually at the forefront of otherwise risky missions. There's no risk of having a pilot taken hostage, killed or used for propaganda purposes when a plane is downed in an area it's not supposed to be under any circumstances, like the case we discussed earlier with U-2 pilot Gary Powers in the USSR. So does that mean the Reaper will push the limits when it comes to its missions?

As we've continue to adopt and adapt UAV technologies, plenty of questions have come up. For instance, will nations using UAVs invade the airspace of other nations for military or intelligence purposes more often? It's a definite possibility, especially when such transgressions can be easily written off as a case of a UAV having simply gone astray while on a practice mission. What's more, concerns have been raised about whether the increased use of unmanned aerial vehicles (as well as ground-based unmanned vehicles) will fundamentally change the nature of war. These questions include:

In addition to legal and moral issues with the Reaper, there are also technical issues of some concern. Reapers aren't equipped to locate other airplanes, which leaves them susceptible to midair collisions. Some people dismiss these concerns, saying that this may be a problem if the drones are being operated in training exercises over U.S. territory but that the odds of collisions happening over the remote skies of places like Afghanistan are quite low. Additionally, future developments in the drone's systems may very well incorporate the ability to detect and steer clear of other aircraft.

Another potential problem with the Reaper is its construction. We've seen that its lightweight design has advantages, but it's also susceptible to high winds and precipitation. During adverse weather conditions, the Reaper is required to be grounded. This is a considerable problem, since many of the Reaper's missions take place over the turbulent mountainous regions of Afghanistan.

But for all the questions the Reaper has raised, the technology has also offered some valuable solutions. In the next section, we'll look at more peaceful uses of the same unmanned flight technology now being used to hunt and kill.