Other Uses for the Reaper 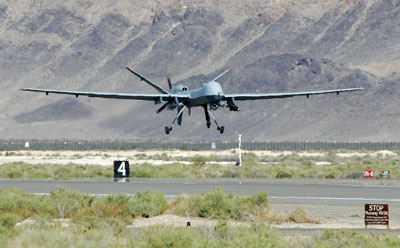 An MQ-9 Reaper takes off on a training mission at Creech Air Force Base.
Ethan Miller/Getty Images

If you're on the side of the road planting a bomb, a swarm of robotic drones overhead may be cause for alarm. However, if you're waist-deep in floodwaters trying to get a signal with your cell phone, a network of communications drones overhead would be a welcome sight. There are some interesting possible uses for unmanned aerial flight systems, and we'll take a closer look at one of them in this section.

As ideas for alternative uses for UAVs and the technologies that support them become more advanced, researchers are pursuing new ways to use unmanned aircraft. One of these ideas comes from researchers in Switzerland who are developing a type of unmanned drone called a Micro Air Vehicle (MAV) that could be released in great numbers over disaster areas. Swarming MAVs -- known as SMAVs -- would be able to reestablish a communications network by creating a wireless network that the drones maintain. This network is known as ­a SMAVNET.

For SMAVNET technology to work, the aircraft would have to be small, lightweight and relatively cheap. The aircraft would also have to be short on frills such as GPS navigating systems or live video feeds. Current SMAV models have small electric motors and weigh as little as around 13 ounces (368 grams). The SMAVs are constructed out of very strong but flexible industrial foam, which helps keep their weight at an absolute minimum.

The drones would be truly robotic, operating without human guidance. Ideally, they could be sent airborne and then coordinate with each other using basic sensors that send information about the altitude and velocity of each craft. Researchers are still looking for ways to determine algorithms that would allow the SMAVs to maintain line-of-sight connection with one another without colliding or adding more danger to the disaster area they're meant to be aiding. Scientists are studying the networks established by army ants as they locate and signal to other ants the sources to food and the pathways between them.

For lots more information on the Reaper and related UAV technology, see the next section.

The Swiss military has developed UAVs in whole or in concert with other nations' UAVs. Currently, the Swiss military uses the Oerlikon Ranger, a surveillance UAV. Switzerland has also designed an unmanned helicopter -- the Neo S-300 -- for commercial purposes like checking on oil pipelines.