The Future of Satellites 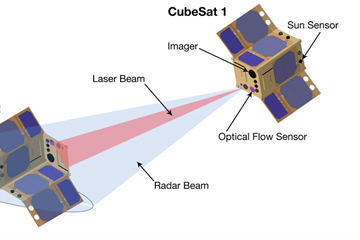 This illustration demonstrates how CubeSat1 could use its radar and laser cross-track sensor to measure the distance and relative motion of the other satellite (CubeSat2 on left).
Image courtesy NASA

In the more than five decades following the launch of Sputnik, satellites, as well as their budgets, have tended to get bigger. The United States, for example, has spent $200 billion on its military satellite program since its inception and now, despite the investment, has a fleet of aging devices without many replacements waiting in the wings [source: The New Atlantis]. Many experts fear that building and deploying large satellites is simply not sustainable, at least not by taxpayer-funded government agencies. One solution is to turn over satellite programs to private interests, such as SpaceX, Virgin Galactic or other space companies, which often don't suffer the same bureaucratic inefficiencies as NASA, the National Reconnaissance Office and the National Oceanic and Atmospheric Administration.

Another solution involves shrinking the size and complexity of satellites. Scientists at California Polytechnic State University and Stanford University have been working since 1999 on a new type of satellite, called CubeSat, that relies on building blocks as small as 4 inches (10 centimeters) on a side. Each cube receives off-the-shelf components and can be combined with other cubes, usually from different teams, to make a more complex payload. By standardizing the design and spreading the development costs to multiple parties, the costs of the satellite don't escalate as greatly. A single CubeSat spacecraft might cost less than $100,000 to develop, launch and operate [source: Pang].

In April 2013, NASA put this basic principle to the test when it launched three CubeSats built around commercial smartphones. The goal was to place the micro-satellites in orbit for a short time and collect some photographs and system data from the phones. NASA launched the satellites on April 21, and they re-entered Earth's atmosphere six days later. Now the agency is looking at how they can deploy a vast network of CubeSats for a coordinated, long-duration mission.

Big or small, future satellites must be able to communicate efficiently with Earth-based stations. Historically, NASA has relied on radio frequency (RF) communication, but RF is reaching its limit as demand for more capacity increases. To overcome this obstacle, NASA scientists have been developing a two-way communication system based on lasers instead of radio waves. The equipment to run the test hitched a ride on NASA's Lunar Atmosphere and Dust Environment Explorer, which launched in September 2013 and headed for the moon, where it began to orbit and collect information on the lunar atmosphere. On Oct. 18, 2013, researchers made history when they used a pulsed laser beam to transmit data over the 239,000 miles (384,633 kilometers) between the moon and Earth at a record-breaking download rate of 622 megabits per second [source: Buck].

For more information on satellites and related topics, check out the links below.

Don't get me wrong, it's great to be a beneficiary of satellite technology. But I can't help but feel a little sad when I look at images showing the hundreds of satellites buzzing around Earth's beautiful blue disc. In some of those images, our planet looks like a Chia Pet, sprouting an ungainly mop of man-made hair. – William Harris