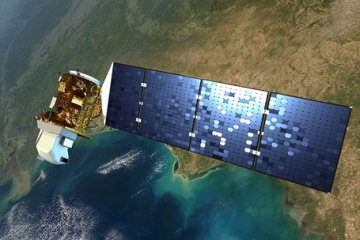 In this artist's interpretation, Landsat checks out the eye-catching view below.
Image courtesy NASA

Not so long ago, satellites were exotic, top-secret devices used primarily in a military capacity, for activities such as navigation and espionage. Now they're an essential part of our daily lives. We see and recognize their use in weather reports. We watch television signals transmitted by DIRECTV and the DISH Network. We have GPS receivers in our cars and smartphones to help us find our way to any destination. And we marvel at images captured by the Hubble Space Telescope and by antics of astronauts living on the International Space Station.

Even still, many satellites escape our notice. Let's meet a few of these unsung orbiting heroes.

Landsat satellites have been snapping images of Earth since the early 1970s, offering the longest continuous global record of our planet's surface. Landsat 1, known at the time as the Earth Resources Technology Satellite (ERTS), was launched on July 23, 1972. It carried two primary instruments -- a camera built by RCA and a multispectral scanner, courtesy of Hughes Aircraft Company, capable of recording data in green, red and two infrared bands. The satellite produced such amazing images and was considered so successful that it was followed by a series of companions. NASA launched the most recent addition, Landsat 8, on Feb. 11, 2013. The device contains two Earth-observing sensors, the Operational Land Imager (OLI) and the Thermal Infrared Sensor (TIRS), which collect multispectral images of coastal regions, polar ice, islands and the continents.

Geostationary Operational Environmental Satellites (GOES) circle Earth in geosynchronous orbits, each hovering over a fixed area of the globe. This allows the satellites to keep a watchful eye on the atmosphere and detect changing weather conditions that could lead to tornadoes, hurricanes, flash floods and thunderstorms. Meteorologists use the information to issue watches and warnings for severe weather. They can also use GOES imagery to estimate rainfall amounts and snowfall accumulations, measure the extent of snow cover and track movements of sea and lake ice. Since 1974, 15 GOES satellites have been placed in orbit, but at any one time, it takes two of the devices -- GOES East and GOES West -- to see Earth's weather.

Jason-1 and Jason-2 have played key roles in long-term analysis of Earth's oceans. NASA launched Jason-1 on Dec. 7, 2001, to take over duties provided by the NASA/CNES Topex/Poseidon satellite, which had been circling Earth since 1992. For almost 12 years, Jason-1 mapped sea level, wind speed and wave height for more than 95 percent of Earth's ice-free oceans. The mission revolutionized the study of ocean circulation and provided data to indicate that sea levels across the planet were rising. NASA officially decommissioned Jason-1 on July 3, 2013, but that didn't stop the ocean-gazing operations. In 2008, the space agency launched a successor to Jason-1 from Vandenberg Air Force Base in California. Jason-2 carries high-precision instruments to measure the distance between the satellite and the ocean surface to within a few centimeters. These measurements of ocean topography arm scientists with information about how fast ocean currents are moving and how much heat is stored in the ocean. This data, in turn, provides insights into global climate patterns.