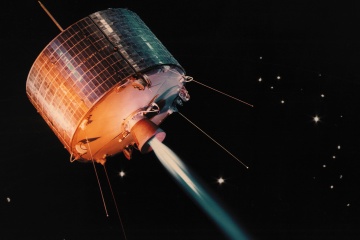 You're looking at the world's first geosynchronous satellite, Syncom I. Unfortunately, it stopped sending signals just seconds before it got comfortable in its orbit. No matter. NASA launched Syncom II a mere five months later.
Image courtesy NASA

Down on the ground, satellites can look very similar -- shiny boxes or cylinders adorned with solar-panel wings. But out in space, these gawky machines behave quite differently depending on their flight path, altitude and orientation. As a result, classifying satellites can be tricky business. One approach is to think about how a device orbits its target planet (usually Earth). Recall that there are two basic shapes of an orbit: circular and elliptical. Some satellites start out elliptical and then, with corrective nudges from small onboard rockets, acquire circular paths. Others move permanently in elliptical paths known as Molniya orbits. These objects generally circle from north to south, over Earth's poles, and take about 12 hours to make one complete trip.

Polar-orbiting satellites also pass over the planet's poles on each revolution, although their orbits are far less elliptical. The polar orbit remains fixed in space as Earth rotates inside the orbit. As a result, much of Earth passes under a satellite in a polar orbit. Because polar orbits achieve excellent coverage of the planet, they are often used for satellites that do mapping and photography. And weather forecasters rely on a worldwide network of polar satellites, which covers the entire globe every 12 hours.

You can also classify satellites based on their height above Earth's surface. Using this scheme, there are three categories [source: Riebeek]:

Finally, it's possible to think about satellites in terms of where they're "looking." Most of the objects sent into space over the last few decades look down at Earth. These satellites have cameras and equipment capable of seeing our world through various wavelengths of light, making it possible to enjoy spectacular visible, ultraviolet and infrared views of our changing planet. A smaller number of satellites turn their "eyes" toward space, where they capture magnificent vistas of stars, planets and galaxies and scan for objects, such as asteroids or comets, that could be heading for a collision course with Earth.