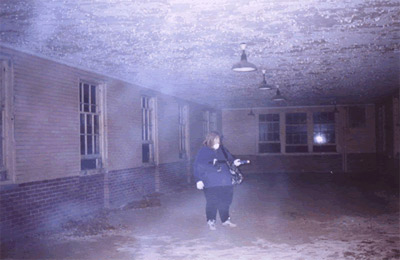 On a January night in 2002, a group of paranormal investigators visited an abandoned mental hospital just south of Chicago, Ill. The hospital had a dark past. Before it was shut down in the 1970s, it had housed the criminally insane. Occasionally, the staff had executed criminals by electrocution.

­The team of investigators walked through Manteno State Mental Hospital, recording both audio and video as they went. They didn't hear or see m­uch while they were there, but when they reviewed their videotape, they discovered something quite startling. In the empty, powerless hospital, they heard very distinctly the sound of a female voice paging Dr. Martin ("Martin" is the best guess -- they are not completely sure of the last name of the doctor).

The voice was recorded by the Southern Wisconsin Paranormal Research Group, one of many research organizations around the world that study electronic voice phenomena (EVP). EVP is the recording of sounds and voices onto tapes, videocassettes and other electronic devices. Those who investigate the phenomenon say that the recordings are the voices of spirits trying to communicate with us. Skeptics say EVP is just radio interference or tricks played by our mind.

In this article, we will find out how researchers study electronic voice phenomena, discover some of the arguments for and against its existence and hear some of the extraordinary voices that have been caught on tape.

EVP is the recording of otherworldly voices onto tapes, reel-to-reels and other types of recording equipment. A newer term for the phenomenon, instrumental transcommunication (ITC), refers specifically to the way the voices are recorded using technology.

Many of the people who regularly record these voices say they are spirits -- voices of dead men, women and children who are trying to communicate from beyond the grave. Since spirits no longer have a body with vocal chords, they can't actually "talk." Instead, the theory goes, they use their energy to electronically manipulate sound into a form that resembles the spoken voice.

Voices are rarely heard during recording -- only during playback. They may be so soft that they can barely be heard or so distorted that they must be listened to over and over again to determine their meaning. The words may be in any language, and they can even be in a combination of languages (called polyglot). Sometimes, the voice answers questions or addresses the researcher directly. It may call the person by name or mention something very personal to the researcher. Sometimes, the voice sounds as though it is singing.

Researchers categorize recordings based on their audibility:

Regardless of how clear the recording is, the voices rarely speak for more than a few seconds at a time. Researchers spend hours listening again and again to decipher the meaning behind just a few seconds of sound.

How is EVP Recorded?

People who study EVP use several types of devices to record the sounds. They may use old-fashioned cassette or reel-to-reel recorders or more modern digital recorders. Most researchers say the cost of the recorder is unimportant -- that inexpensive recorders work just as well as expensive ones.

They attach an external microphone to the recorder, one with a long enough cord so that it avoids picking up the sound of the tape recorder itself. The external microphone also enables the researcher to record his or her thoughts while the process is underway. Headphones are often used because many of the voices are soft and difficult to hear otherwise.

Jennifer Lauer, director and founder of the Southern Wisconsin Paranormal Research Group, is called on regularly by companies and homeowners to document paranormal activity. She describes the recording process her team uses:

We'll go out to the location and we'll interview the witnesses and find out what is going on -- what they're seeing and hearing. We'll also take equipment readings to make sure what they're sensing isn't an electromagnetic field or radio waves.

We record EVP in two different ways, depending on what type of haunting it seems to be ... EVP can be a residual type of energy. It can be a clip that happened at one time and replays itself like a movie. If it's a residual haunting, we let the tape recorder go in the room to see if we pick up anything.


With an intelligent haunting [meaning that an actual spirit is present], we would ask questions because we know we would get answers ... We sit down in a group of four to six people. We put the tape recorder in a central location between all of us. We proceed to one by one ask a question to whatever is in the room. After our question, we leave about 20 seconds of airtime for the question to be answered, and then the next person will ask a question.

"... You know by experience, Mark, how dangerous drugs of all kinds can be. Try to warn humanity that they not only alter their present lives on your side, but also influence in a negative way their future lives. Go on with your experiences and you will see that the bridge to the States will soon be strengthened. Regina, as your twin soul, can help you a lot. Listen to her inner voice, and you will be in the right way." 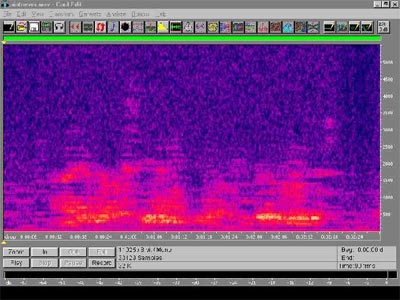 Wave form: This screen shows the pattern of a voice directly after being input into the computer for analysis.

After making the recording, researchers listen to the tape over and over again, listening for any sound that resembles a voice. They may also use a computer to analyze any voices that do emerge. Here is an example of the analytical process used at The Ghost Investigators Society:

Statistics screen: After viewing the wave pattern, researchers view the wave form statistics. This in essence gives the makeup of the voice sample itself, such as pitch, amplitude and sample rate.
Analysis graph: After viewing the statistics of the wave form, researchers compare the results to the analysis graph. After doing this, they take all the information gathered from the wave form and determine if the voice sample is EVP or simply a stray sound picked up by the microphone.
Courtesy The Ghost Investigators Society

Researchers may also use software to make the recorded sound more audible. "I use software to remove background noise, to boost the strength of their voices or to remove clicking or hiss from the recording," explains Dave Oester, Ph.D., cofounder of the International Ghost Hunters Society. "Some EVP require no filtering at all; they are very clear. EVP voices are filled with emotions and are never monotone."

When using a very quiet cassette or reel-to-reel recorder, researchers often run a fan or play radio static or the babble of prerecorded voices (usually in a foreign language) during playback, because they say that the background noise helps the voices form on tape. The theory is that the communicator translates the noise into words.

Not everyone believes that the voices EVP researchers hear are otherworldly spirits. Some skeptics say that EVP is nothing more than radio interference. Others say that people who claim to have heard these voices are either imagining them or else their minds are creating meaning out of insignificant sound, projecting what the person wants or expects to hear on the recording.

"Some of the 'voices' are most likely people creating meaning out of random noise, a kind of auditory pareidolia [the illusion that something obscure is real] or apophenia [mentally connecting unrelated phenomena]," writes Robert Carroll, Ph.D. on his Web site, The Skeptic's Dictionary.

"Humans are exceptionally wonderful at finding patterns in noise," says Edwin C. May, Ph.D., president of the Laboratories for Fundamental Research. "The hardware in our sensory system is designed to see changes in things." So when we hear repeated sounds, our brain picks out and pieces together what sounds to us like spoken words. If you listen to thousands of pieces of audio, Dr. May contends, you'll eventually find one that sounds like a voice. "It's the monkey on the typewriter issue."

EVP researchers counter that the highly interactive communication they have engaged in would be impossible to discount as interference or brain tricks. "I have been an amateur radio operator for 40 years, and I have never had tape or digital recorders pick up any artificial interference," says Oester. "Also, how can an interactive EVP, where the spirit is responding to my questions or commenting on my words, ever be considered interference?"

Even Hollywood has caught onto EVP with the film "White Noise." This suspense thriller stars Michael Keaton as a husband who becomes obsessed with trying to contact his dead wife. But when he finally succeeds and hears her voice on tape, he opens up a portal to another world. 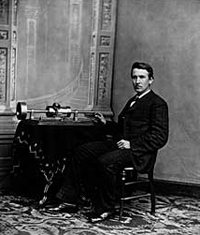 One of the most well-known EVP researchers of the 20th century was a Swedish opera singer, painter and film producer named Friedrich Jurgenson. His interest in electronic voice phenomena was sparked one day in 1959, when he recorded the sounds of birds singing in a forest. When he played the tape back, he heard a female voice say, "Friedrich, you are being watched. Friedel, my little Friedel, can you hear me?" It was the voice of his dead mother. Jurgenson went on to record many other voices over the next four years, and he published two books: "Voices From the Universe" and "Radio Contact with the Dead."

Dr. Konstantin Raudive, a Latvian psychologist, heard of Jurgenson's experiments several years later. At first he was skeptical, but then he tried the technique himself and wound up recording many voices, including that of his deceased mother.

In the 1960s and 1970s, EVP became a legitimate, if controversial, arm of paranormal research. American researchers George and Jeanette Meek and psychic William O'Neil recorded hundreds of hours of EVP with radio oscillators. They claim to have worked closely with another scientist, Dr. George Jeffries Mueller. The only catch was that Mueller was deceased.

Sarah Estep, one of the most outspoken EVP researchers, started the American Association of Electronic Voice Phenomenon (AAEVP) in 1982. She claims to have communicated with thousands of ghosts, as well as with aliens.

Researchers around the world continue to investigate EVP. Their findings are documented on dozens of Web sites, as well as in books.

For more information on EVP and other paranormal phenomena, check out the links on the next page.