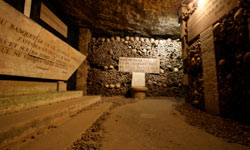 The Catacombs of Paris contains millions of human bones that were removed from the city's cemeteries in the 18th and 19th centuries.
iStockphoto/Thinkstock

The Catacombs of Paris, that vast underground network of tunnels that holds the remains of more than 6 million deceased Parisians, has been a source of inspiration for writers from Victor Hugo to Umberto Eco, and it's also one of the top destinations in the world for ghost hunters. Beneath Paris lies a tunnel network of mind-boggling complexity covering a total of roughly 185 miles. Because of hazardous conditions, most of the tunnels are closed to the public, but visitors with a taste for the macabre can visit the Catacombs, which are located in the deepest bowels of the city [source: Associated Press].

The Catacombs were formed at the end of the 18th century when the Cimetière des Saints-Innocents, which had been in use for more than 10 centuries, became a source of disease for the city. In 1785, the cemetery was cleared out, and bodies were transferred to old quarries on the city's outskirts. From the late 18th century until the mid-19th century, black-draped carriages passed the city's many cemeteries, transferring human remains to their new underground destination. The bones of millions of people were ultimately relocated to the Catacombs, where they were collected and fashioned into elaborate walls and pillars of skulls and bones.

Because of the disrespect shown to the dead, the Catacombs of Paris are widely believed to be one of the most haunted places on Earth. Visitors to the subterranean site have reported the feeling of being touched by invisible hands, being followed, and some have even felt the sensation of being strangled. Perhaps it's the sight of all those bones, but the Catacombs have made more than a few visitors shake in their boots [source: Whittaker].