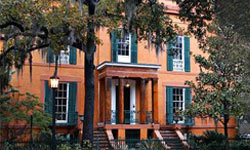 The Sorrel-Weed House is one of Savannah's biggest draws for ghost hunters.
Photo courtesy of Cincinnatus7

The American South has a rich history, but few cities have a more interesting past than Savannah, Ga. The handsome, mid-size city has an unofficial saying, "Savannah was built on its dead," because some portions of the city were built on top of large cemeteries with thousands of graves. Perhaps that's why Savannah is said to have so much paranormal activity [source: Hoevel].

There are other factors that could account for the city's high population of ghosts and ghouls. Savannah was founded as a debtor colony in the 18th century and it served as a battleground during the American Revolution. During the Civil War, General Sherman and the Union Army occupied the city. So many ghosts, spirits and apparitions have been reported in Savannah that the American Institute of Parapsychology named it America's Most Haunted City in 2002.

One popular destination for any ghost tour of Savannah is the Pirates' House, a restaurant and tavern that is among the oldest in Georgia. The Pirates' House was popular among sailors in the 18th and 19th centuries, and local legend has it that Captain Flint from Robert Louis Stevenson's popular book "Treasure Island" died in the bar. The Pirates' House also has an underground tunnel that leads out to the Savannah River.

Another supposed hotspot for ghosts is the Sorrel-Weed House, an enormous 1838 house that has been featured on popular TV shows like "Ghost Hunters" and "The Today Show". Visitors to the Sorrel-Weed House have reported hearing noises that sound like war, marching bands or parties when the house is empty. Others have reported feeling vibrations that make them feel uncomfortable.

But paranormal activity is something that needs to be seen or felt to be believed. Because of its reputation as a ghost hangout, Savannah is home to dozens of haunted tours that will take you deep into the city's most haunted haunts. For a deeper look at Savannah's haunted history, Sixth Sense Savannah offers a two-hour guided tour that will give you an overview of Savannah's history with stories of local encounters with ghosts [source: Sixth Sense Savannah].