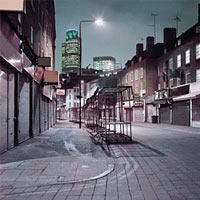 The Whitechapel section of London is where Jack the Ripper killed five women in 1888, and today those still fascinated by the story can tour the area where the murders took place.
Peter Kindersley/Getty Images

With its dark, foggy streets, London seems a perfect place for ghosts to reside, and there is no shortage of ghost tours in the British capital. London visitors can learn about the city's haunted history on a variety of bus tours and walking tours, exploring everything from Bloody Mary to the city's ancient plague pits. Richard Jones, a magician, storyteller and author of the book "Walking Haunted London", leads some of London's most popular tours. Jones is considered to be an expert on psychic and paranormal activity, and he specializes in Jack the Ripper lore [source: McLaughlin].

The killing of five (or possibly six) women in the Whitechapel section of London in 1888 shocked and horrified the world. Today, the mystery of the killer, who was identified only by the nickname "Jack the Ripper," continues to fascinate, making Whitechapel a popular destination for ghost hunters, history buffs and fans of the macabre. Between August and November of 1888, a mystery killer murdered the women -- all prostitutes -- in particularly gruesome fashion. All of the women -- except for one -- were horribly mutilated, suggesting to some experts that the serial killer was either a doctor or a butcher with knowledge of human anatomy [source: BBC].

The Jack the Ripper walk takes place every night at 7 p.m., and it begins at the Aldgate East underground station. The walk takes visitors around the historic streets of Whitechapel, exploring the social history of the area, clues about the killer and the police hunt that ensued. Ten Bells Pub is a common destination for any Jack the Ripper tour of Whitechapel, as one of Jack the Ripper's victims was seen drinking at the pub before her body was discovered nearby.