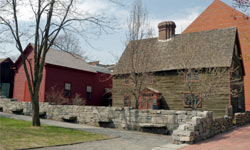 The Witch Trials Memorial, which is dedicated to the innocent victims of the Salem Witch Trials, is just part of several haunted tours you can take through this centuries-old town.
iStockphoto/Thinkstock

More than 300 years have passed since the Salem Witch Trials, but the New England town is still haunted by the nation's most infamous witch hunt. From 1692 to 1693, in colonial Massachusetts, more than 200 people were accused of practicing witchcraft, and 20 of the accused were ultimately executed.

In the winter of 1692, the daughters of Reverend Samuel Parris, aged 9 and 11, began acting strangely. They made unusual sounds, threw things, and a local doctor blamed the supernatural for their odd behavior. Pressured by local magistrates, the girls blamed three women of casting a spell on them. After a trial, the women were put in jail, setting off a wave of paranoia in Salem Town. In May 1692, Governor William Phipps established a special court to decide witch trials, and in the months that followed, the newly formed court convicted dozens of people of witchcraft based on spectral evidence (testimony based on dreams and visions) [source: Blumberg].

One of the most popular Salem attractions for ghost hunters and ordinary tourists alike is the Turner-Ingersoll Mansion, better known as the House of the Seven Gables. Writer Nathaniel Hawthorne, the cousin of Susannah Ingersoll, who lived in the house, made the house famous. Local legend has it that Ingersoll still haunts the old house, and visitors have reported several strange occurrences there. Today, the iconic house is a museum, and it's part of the House of the Seven Gables Historic District.

For a look back at Salem's haunted history, Salem Historical Tours offers the Haunted Footsteps Ghost Tour, an evening tour that passes through historic streets, highlighting the events of the 1692 witch trials. The tours also visit Salem's oldest cemetery and the Witch Trials Memorial, which is dedicated to the innocent victims of the Salem Witch Trials [source: Salem Historical Tours].