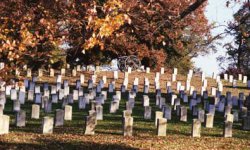 During the American Civil War, the quiet town of Gettysburg, Penn., witnessed unparalleled death and destruction. Approximately 51,000 people -- enough to fill a football stadium -- were wounded or killed in this three-day campaign [source: Nesbitt]. Some died immediately by canon fire; others suffered for weeks, enduring primitive surgeries and the mental anguish of knowing that they were doomed to leave their loved ones behind. It's no surprise that an area so saturated in human suffering continues to be haunted by the soldiers who paid the ultimate sacrifice.

In addition to the sheer amount of suffering that occurred during that short three-day period, experts claim the area around Gettysburg remains haunted because of the large amount of quartz-bearing granite in the area. Some people believe that quartz absorbed the energy of the dying and suffering and occasionally releases this energy, resulting in supernatural experiences [source: Nesbitt].

On the tour, visitors have experienced everything from touches, smells and sounds to spotting orbs or unusual figures lurking in the distance. Nesbitt reports that one group saw a large, blue column of light descend from the sky and engulf a monument on East Cemetery Hill. Additionally, two tour groups watched -- for a full 45 minutes -- hazy figures donned in Civil War regalia move around a Civil War era home.

Another phenomena that tourists frequently experience is the infamous phantom battalion -- Nesbitt reports six documented sightings. The battalion appears to people, marches around in formation, then vanishes. The woman in white, who may be the spirit of a nun who came to minister to the wounded, now lurks in the Spangler's Spring area. In the area around Gettysburg College, tourists claim to see individual soldiers, sometimes escorting ladies, walking in a blue haze, as well as hearing ghostly noises in dorms and fraternity houses. In an administrative building of the college, a former Civil War hospital, people report visions of gory hospital scenes featuring wounded soldiers suffering from disease and amputation.

Tens of thousands of visitors take the Ghosts of Gettysburg tour each year. Costumed guides carrying candle lanterns offer four different tour routes as well as a bus tour to sites too far afield. Additionally, in conjunction with the Gettysburg and Northern Railroad, the ghost train tour takes visitors through a haunted engine house to listen to recordings of EVP (electronic voice phenomena -- recorded voice of the dead) obtained during paranormal investigations of the engine house.