The Case Against ESP 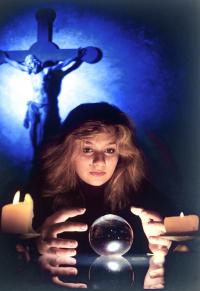 A lot of skeptics think this woman and others like her are full of baloney.
Ted Thai/Time Life Pictures/Getty Images

­Parapsychology has gained a lot of credibility over the past 100 years, but there is s­till a strong contingent of skeptics who see ESP studies as misguided at best and completely worthless pseudoscience at worst.

For a number of these skeptics, the primary argument against ESP is, quite simply, that it doesn't make any sense. As we saw earlier, the existence of the ESP phenomenon is fundamentally at odds with the known "rules" of the universe, as supported by countless scientific experiments. As much as we might want to believe it, these skeptics say, ESP is just too extraordinary to accept without equally extraordinary evidence.

And the widespread anecdotal evidence of ESP, they say, certainly isn't extraordinary -- not when you consider the big picture. To the average person, a dre­am or feeling coming true, in precise detail, seems too amazing to be simple coincidence. But if you look at it from a statistician's viewpoint, it's much less incredible. There are more than 6 billion people on Earth, constantly thinking and all experiencing dozens of significant events every day. Statistically, on any particular day, some of the things some people envision will line up closely with some of the things those people happen to experience. In all of your time on Earth, this will undoubtedly happen to you now and then. Add to this the desire for an afterlife, the skeptics say, and it's no wonder such a large section of the population deludes itself into believing in psi phenomenon.

The chances of a hit climb even higher when you consider people's ability to make reasoned, educated guesses. For example, Morgan Robertson's apparent prediction of the Titanic disaster seems less incredible when you learn that he was a former seaman who knew a lot about modern ship technology. His book correctly guessed details of the real ship and the crash, skeptics say, because he had a good understanding of how a ship like that would be built, how it might get into trouble and what would happen in that scenario.

Similarly, some people may seem to have psychic powers when they really just have heightened intuition. Your five senses are constantly picking up on information, and your brain is constantly processing this information on an unconscious level. Some people are particularly adept at analyzing seemingly irrelevant information and putting the pieces together to make highly accurate guesses. For example, you might inexplicably know when somebody is lying to you because you unconsciously recognize subtle variations in facial expression or tone of voice.

Many ESP believers counter these arguments with the assertion that true psychic visions aren't everyday thoughts, but rare revelations easily distinguished from a person's normal thinking. If you only consider these special visions, they argue, the coincidence explanation doesn't hold up. The educated guessing theory may explain a lot of apparent revelations, they say, but not all.

In any case, it's clear that human nature does lead people to focus on a few instances of extraordinary coincidence as evidence of something supernatural, while completely ignoring the thousands of dreams and visions that don't line up with reality in any remarkable way. Out of context, the individual hits are very impressive, especially if you start to misremember your thoughts so that they correspond even more closely with reality. Whether or not this accounts for all alleged ESP phenomena, it most likely accounts for a lot of it.

But what about the research subjects and the professed psychics who demonstrate ESP abilities above chance levels? In the next section, we'll look at the skeptic's response to this data.