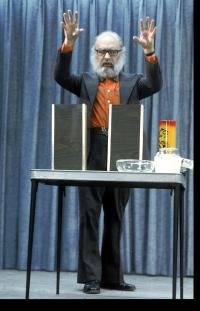 Most parapsychologists recognize that the skeptical viewpoint is largely beneficial to the public's understanding of ESP phenomena. High-profile skeptics, such as former magician James Randi, help steer the ESP discussion away from emotional responses and toward logical analysis by unmasking f­alse psychics and providing other reasonable explanations for apparent paranormal phenomena. By explaining the statistics of coincidence and the tricks of the magic trade, these skeptics get the public thinking critically about its beliefs and assumptions.

But skeptics like Randi can also detract from the ESP discussion. Randi is widely known for his offer of one million dollars to anyone who can prove the existence of paranormal phenomena in a supervised demonstration. So far, nobody has been able to claim the prize, which Randi suggests is evidence that none of this stuff exists. Several high-profile professed psychics have accepted the challenge and then backed out, which certainly casts them in a bad light.

To many parapsychologists and ESP believers, Randi's challenge is just theatrics, like the psychic stage shows he exposes. Generally, legitimate scientists are not in the business of claiming prize money in publicized demonstrations, nor are they necessarily out to prove ESP's existence in the first place. The primary mission of science is to investigate truth -- generally speaking, scientists are not out to profess their own beliefs, only their own findings. By lumping legitimate researchers in with entertainers, skeptics may confuse the issue.

ESP believers mainly find fault with the implication that providing a logical explanation for apparent psychic phenomena and unmasking false psychics disproves the existence of ESP. It's an absolute certainty that many demonstrations of psychic power are fraudulent; it's also certain that experiments will be imperfect, and that data may turn out to be useless. But this has no bearing on the validity of the theory itself.

When all is said and done, we simply don't know whether ESP exists. Given what we do understand about the way physics operates in the universe, ESP doesn't make any sense, but this is not a valid reason to rule it out. In the history of mankind, thinkers have reevaluated their model of the universe many times in response to new evidence. The scientific process is never about deciding what can't be; it's always about figuring out what is.

For much more information about ESP, including intriguing experiments, famous predictions and notable frauds, browse the links below.