Implications of Consciousness After Decapitation 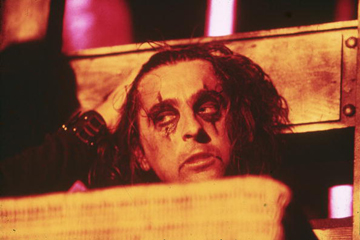 Alice Cooper prepares himself for the guillotine during his stage show in 1975.
Michael Ochs Archives/Getty Images

There has long been an argument against the concept of consciousness following decapitation. Some believe that the movements seen in the face are the result of the voluntary muscles that control the lips and eyes are merely in spasm after a sort of short circuit or from relic electrical activity. This is likely true for the rest of the body, but the head has the distinction of housing the brain, which is the seat of consciousness. The brain receives no trauma from a clean decapitation and may therefore continue to function until blood loss causes unconsciousness and death.

Exactly how long a person can remain conscious after decapitation remains debatable. We know that chickens often walk around for several seconds after decapitation; the Dutch rat study mentioned earlier suggests a length of perhaps four seconds. Other studies of small mammals have found up to 29 seconds [source: Khuly]. This in itself seems a horrid length of time for such a state. Take a moment to count off four seconds while you look around the room; you'll likely find you can take in quite a bit visually and aurally during that time.

This is what is most disturbing about the concept of consciousness remaining after decapitation; we may feel pain and experience fear in those few moments before death. This has been reported in a number of cases where consciousness appeared to remain following decapitation. Most recently, in 1989, an Army veteran reported that following a car accident that he was in with a friend, the decapitated head of his friend changed facial expressions: "First of shock or confusion then to terror or grief," [source: Bellows].

Both King Charles I and Queen Anne Boleyn are reported to both have showed signs of trying to speak following their beheadings (by executioners' swords, rather than by guillotine) [source: Maslin]. When he spoke out against the use of the guillotine in 1795, German researcher S.T. Sommering cited reports of decapitated heads that have ground their teeth and that the face of one decapitated person "grimaced horribly" when a physician inspecting the head poked the spinal canal with his finger [source: Sommering].

Perhaps most famously was the study conducted by a Dr. Beaurieux in 1905 of the head of executed criminal Henri Languille. Over the course of 25 to 30 seconds of observation, the physician recorded managing to get Languille to open his eyes and "undeniably" focus them on the doctor's twice by calling the executed man's name [source: Bellows].

For more information on decapitation and other forms of capital punishment, head over to the next page.