Bigfoot or an Ancient Ape? 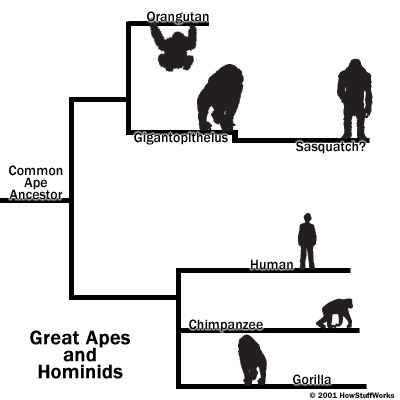 The gigantopithecus, a possible ancestor of the sasquatch, is most closely related to the modern orangutan.

There have been numerous reported sightings, and sasquatch researchers have found hair, footprints and body prints, but there is still no conclusive evidence that such a creature exists.

When considering the sasquatch scientifically, the first question is whether or not such a creature could exist, given what we know about zoology. This is an easy one, because fossil evidence shows that such a creature did exist, 1 to 9 million years ago. This animal, which scientists call gigantopithecus, was native to what is now central and southeast Asia. On the evolutionary tree, gigantopithecus is most closely related to the orangutan, the only modern Asian ape (gorillas and chimpanzees live in Africa).

We don't know much about gigantopithecus, except that it was larger than a gorilla and had teeth similar to a human's. It is compelling that the closest living relative of gigantopithecus, the orangutan, shares some of the characteristics that eyewitnesses attribute to sasquatch. Orangutans are covered in long, reddish-brown hair, are highly intelligent and exhibit a great deal of curiosity about human behavior. They are not particularly vocal, but will on occasion make loud, howling calls to alert other orangutans of their presence.

If sasquatch does exist, it is likely a close relative of the orangutan. With their long, reddish-brown hair, orangutans are similar in appearance to the sasquatches described by most eyewitnesses. They also live a solitary lifestyle, which matches the reported behavior of sasquatches.
Photo courtesy Sumatran Orangutan Society

Orangutans are remarkably different from other primates in how they live. While most apes and monkeys form tight-knit communities, orangutans are solitary creatures. After childhood, they gather with other orangutans only to reproduce. Orangutans are so widely dispersed in an area that they only rarely run across one another.

­This sort of behavior might account for the rarity of sasquatch sightings, as well as the lack of skeletal remains. It makes sense that an intelligent animal that prefers to be alone would retreat into the deep woods (or up into the mo­untains) as human civilization encroached on its territory. And if it were smart enough, it could conceivably hide from humans for hundreds and hundreds of years. If the population were widely dispersed, as with orangutans, and the animal had a fairly long life span, as do orangutans and other apes, skeletal remains would show up only once in a while. Most bones decay in a relatively short period of time (as few as 5 to 10 years), so it is possible that scientists wouldn't come across them at all. Believers in sasquatch suggest that it is not only possible, but quite likely that the bones would go undiscovered, since there has never been a full-blown, scientific search for them.

The gigantopithecus-descendant theory is the most likely explanation of where sasquatches might come from. But to skeptics all over the world, there is a much more likely explanation: They say the sasquatch phenomenon is a product of hoaxes, misidentifications and basic human nature. In the next section, we'll look at some of the arguments for and against this hypothesis.