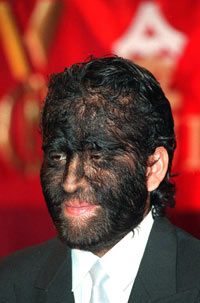 Most people have heard of the witch hunts of the 16th century. Less well known are the werewolf hunts that happened in the same time period. A common belief was that werewolves turned their skin inside out to return to human form, so one interrogation practice involved cutting and pulling back a person's skin to see if there was fur underneath.

There are several notable claims of lycanthropy that took place during these werewolf hunts. In 1573, an alleged werewolf, Gilles Garnier, was burned at the stake. In 1589, a man known as Stubbe Peter or Peter Stubbe, was executed near Cologne, Germany for cannibalism and multiple murders. He claimed he had a belt that allowed him to become a werewolf. In 1603, a young man named Jean Grenier­ claimed responsibility for a series of murders and disappearances, saying he had a skin that let him become a wolf. A court determined that Grenier was insane and confined him to a monastery.

In France, between 1520 and 1630, there were more than 30,000 recorded cases of people who claimed to be -- or appeared to be -- werewolves [source: Dunlop]. As with the witch trials, there were probably several simultaneous causes for this, and for the werewolf hunts:

Wolves aren't a large part of the industrial world -- perhaps that's why many of today's werewolf stories take place in cities.
AFP/Getty Images

The belief that werewolves are real isn't confined to the distant past, though. In the 1930s, researchers working in the part of Africa now known as Ghana reported a widespread belief that people could turn into hyenas. These shape-shifters were typically witches living in the grasslands. As recently as the 1980s, an obscure practice in the Iberian Peninsula -- the part of Europe that includes Spain and Portugal -- was intended in part to prevent children from becoming werewolves. This practice involved older children acting as godparents for their younger siblings, beginning with the seventh or ninth child [source: da Silva]. According to folk tales in this part of the world, werewolves recruit new members from excess children. Children who are born in the caul, or with part of their amniotic sac covering their face -- may be more susceptible to becoming werewolves, or, conversely, healers.

In industrialized parts of the world, the idea of werewolves, or of wolves in general, can seem distant and archaic. Perhaps that's why many more recent depictions present lycanthropy as a manageable condition. Werewolves are ordinary people with a keen sense of smell who happen to be unpleasant to be around for a few days each month.

You can learn more about werewolves and the supernatural by following the links below.