A New "Talking Board" 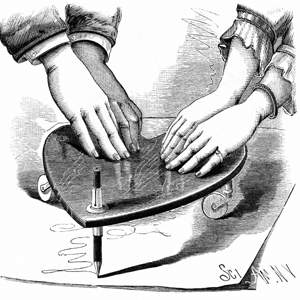 This engraving shows a planchette from 1885. Note the pencil so the spirit could "write" a message through the medium.
Universal History Archive/Getty Images

In the mid-19th century, a movement called Spiritualism swept through the United States. Mediums, mainly women, who claimed they could contact the dead gained large followings.-- perhaps because deadly disease epidemics were rampant, and other "spiritual" outlets at the time seemed stodgy and paternalistic [source: Suart]. Regardless, by the early 20th century, séances, readings and trances were all the rage as entertainment or as serious attempts to make contact with those who had passed on. In this mystical context, the Ouija board was an exciting development [source: Horowitz].

The original Ouija design was simple, somehow creepy, and has hardly changed to this day: a rectangular, wooden board with a small, heart-shaped pointer, or planchette, meant to glide around it on three tiny legs. Printed on the center of board were letters and numbers: the English alphabet in two arced lines, and a line of numbers directly below it. In the upper left were the moon and the word "yes;" in the upper right the sun and "no," and across the bottom, "good bye."

Mediums had been using similar "talking boards" or "spirit boards" for years. There was the dial plate, a spinning wheel with letters and numbers along its circumference, which stopped at characters to spell out a spirit's message; and the alphabet board, which was similar to the Ouija but had people pointing consciously to various letters until the spirits responded noisily, eventually spelling a message; and the planchette, essentially a Ouija pointer but with a hole for a pencil so the spirit, moving the planchette through a medium, could write his message down [sources: Horowitz, Museum of Talking Boards].

The Ouija board put divination into a neat, mass-marketed package. Anyone, it seemed, could talk to a long-dead mother, or W.H. Auden, or any random spirit using only this wooden board and pointer. Or just inject some "great mirth-making" into a party, as an ad from 1920 put it [source: Australian Paranormal Phenomenon Investigators].

It's not just the Ouija design that's stood the test of time. Gameplay, too, has changed very little in its century on the shelves.