Why Does the Pointer Move? 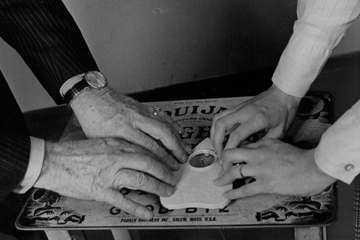 Two people play the Ouija board in 1972. The basic design has not changed in more than 100 years.
Millard Smith/The Denver Post via Getty Images

What or who is driving the motion of the planchette is and always will be controversial. In the spiritual crowd, it's a force from the beyond. In the science crowd, it's much more earthly.

The short version is: things move when we push them. The long version is a lot more interesting.

Scientists call it the ideomotor effect. Essentially, the ideomotion theory claims the unconscious mind can cause the body to move without the conscious mind knowing about it [source: Stafford].

The pregnant woman's "pendulum test" for her baby's gender is a good example of ideomotion. In this test, she holds a string weighted with a ring over her belly and waits for it to move on its own. Back-and-forth swinging means a boy; circular motion means a girl. Without her consciously willing it, her finger muscles make tiny movements, which will build up until the pendulum starts to swing in one direction or the other.

The "self-moving" pendulum, in fact, was the subject of one of the earliest studies of ideomotion. In the 1800s, in the context of hypnosis research, a man named Anton Chevreul found that a pendulum could help reveal a person's unconscious thoughts by magnifying minute movements of which the subject was not consciously aware [source: Stafford].

In a much later study that focused specifically on the Ouija board, published by psychologists at the University of British Columbia in 2012, researchers posited the effect is strongest when multiple people have their fingers on the planchette. Each blindfolded subject was told he or she was one of two people touching the pointer, and as the planchette moved, the subject often claimed the other player was pushing it -- when in fact there was no other player involved [source: Palmer]. A person's conscious belief that she is not moving the pointer, they say, enhances her unconscious mind's ability to trigger the movement without her knowing [source: Wilson].

In this way, the game's "two or more players" instruction makes a lot of sense: The more people touching the pointer, the easier it is to believe you aren't moving it. Often, the player or players have a preference for a specific outcome and unconsciously move the planchette in the desired direction.

Not that it always moves. Or spells something remotely intelligible.