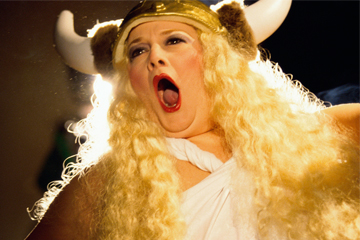 If the conditions are just right, it's possible to shatter glass with the human voice.
Purestock/Thinkstock

It's opera's equivalent of the slip-on-the-banana-peel scene: The soprano on stage hits a high note so long and piercing that it cracks the opera glasses of the elegant dowager in the box seat. Hollywood can do that with a trick of editing, but is it possible in real life?

Well, yes it is. But so is being struck by lightning. In other words, it takes a rare convergence of particular conditions. To understand these conditions and how they work together, a crash course in acoustics is in order.

Sound is acoustic energy. Like electricity, sound energy travels through substances in waves, which "excites" the substance's particles and causes them to vibrate at a certain frequency. Frequency refers to the number of waves passing through a given point over a given period of time, and we measure frequency in hertz: one hertz equals one wave per second.

Every substance has a natural, or resonant, frequency -- the frequency at which its own atoms vibrate. For example, suppose your bass guitar-playing neighbor cracks the plaster on your walls when she plays a low, driving bass line. The frequency of a bass guitar's lower, deeper notes run from 40 to 150 hertz. (The quality of your neighbor's speakers also will affect the quality of the sound.) Thus, the plaster's resonant frequency must fall somewhere in that range, because when a substance encounters a frequency it matches, it absorbs the energy rather than reflecting it [source: San Diego Opera].

Glass-shattering waves carry more energy. They're shorter and "choppier"; thus more of them pass through per second, at roughly 556 hertz [source: San Diego Opera]. To shatter glass, the note's frequency must be the same as that of the glass. That's one condition.

The note also has to be loud too, a quality known as intensity. Intensity is measured in decibels. While conversational tones average 50 to 60 decibels, a trained vocalist might have the pipes to approach the approximately 105 decibels needed to break glass [source: San Diego Opera]. Even then, he or she would have to be so close as to risk serious facial cuts if the glass explodes. More likely, a boost of electronic amplification would be needed.

Finally, the glass must be strategically selected. A wine glass is a good choice. It's fine and thin – unlike, say, a beer stein – which maximizes the amount of stress per particle. An empty glass cracks more readily (although less dramatically) than one containing wine; air, being less dense than liquid, carries sound better. And if you can find a wine glass with a flaw in its structure, even an invisible one, that helps by providing a weak spot.

Incidentally, real-world tests involving resonant frequencies offer more than an excuse to shatter glass. Resonant frequency is the basis of ultrasonic testing, which is used to determine the safety of structures ranging from pipelines to airplanes. Ultrasonic testing is a type of nondestructive testing (NDT), which allows engineers to monitor the integrity of construction materials as, where, and while they're used – which is preferable to otherwise dismantling a building or airplane for analysis in a laboratory.

Author's Note: "Can you really shatter a glass with a high note?"

A few years ago I was cleaning the kitchen when I tipped a chair too far back on its rear legs. It slipped from my hand and hit the oven door. The door's window exploded into a dramatic, vitreous meteor shower. The floor glistened, stunning as a winter landscape after an ice storm. Although the source of the energy was not sonic, the outcome was similar, and just as unlikely. (Guess I was just lucky.)

Can Adults Overcome Math Anxiety?
What do particle physicists see when collisions happen?
HowStuffWorks: Illustrated: Scutoids! Just Like Spheres and Cubes, But Not