What is Space Junk? 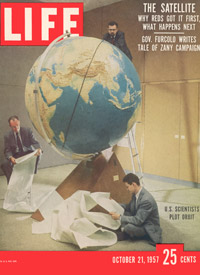 Space junk got its start in the middle of the twentieth century, at the very beginning of the space race. When the Soviet Union launched Sputnik I, the first satellite in history to go into orbit around the Earth, on Oct. 4, 1957, the world paid attention. Although the satellite was small by today's standards -- it was about the size of a beach ball -- Sputnik still caused a great amount of fear among nations, especially the United States. Along with sparking the space race, the launch worried many Americans because of its association with the nuclear arms race. If the Soviets were capable of putting a satellite into space, they could also strap a nuclear bomb on top and reach a target in a matter of hours.

Since this caught everyone off guard, several countries threw resources into space programs -- the event directly led Congress to create the National Aeronautics and Space Administration, or NASA.

Governments, and now cell phone, television and GPS receiver companies, have launched hundreds of satellites a year since the beginning of the space race. These satellites, along with rockets and other objects sent up into space, make up the majority of space junk. The NASA Orbital Debris Space Program Office also lists these types of objects as examples of space junk:

How dangerous could all these objects be in space? See the next page to find out.